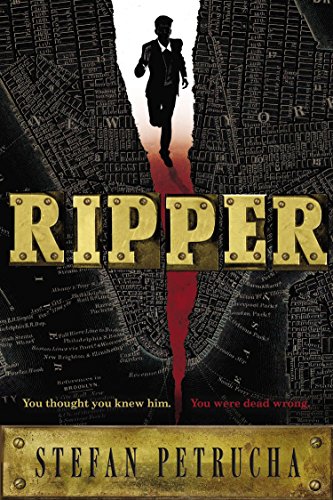 In Stock
$16.99
inc. GST
Adopted by famous Pinkerton Agency Detective Hawking in 1895 New York, 14-year-old Carver Young hopes to find his birth father, but when he becomes involved in the pursuit of notorious killer Jack the Ripper, Carver discovers that finding the truth can be worse than ignorance.
Very Good
Only 1 left

Panic grips the city!
There is a killer loose in New York City, and Carver Young is the only one who sees the startling connection between the recent string of murders and the most famous serial killer in history: Jack the Ripper. Time is winding down until the killer claims another victim, but Carver soon sees that, to The Ripper, this is all a game that he may be destined to lose.

Petrucha "provides both a well-crafted romp through yesteryear's New York and an enticing companion for it." -- Kirkus Reviews

A lifetime fan of comic books, science fiction, and horror, Stefan Petrucha developed a love for all sorts of literary work in high school and college, eventually learning that the very best fiction always brings you back to reality, so really, there's no way out. At times he has been a tech writer, and educational writer, a public relations writer and an editor for trade journals, but fiction has always been his passion. He has written several graphic novels for the X-Files, Tales from the Crypt and Nancy Drew series and has also published numerous young-adult novels in the science fiction and horror genres, including Paranormal State, a companion book to the hit A&E television show of the same name. Stefan lives in western Massachusetts with his wife and daughters. Visit Stefan Petrucha online at www.petrucha.com

GOR007385165
Ripper by Stefan Petrucha
Stefan Petrucha
Used - Very Good
Paperback
Penguin Putnam Inc
2003-10-13
426
0142424188
9780142424186
Short-listed for Delaware Diamonds Award (Middle School) 2013
Book picture is for illustrative purposes only, actual binding, cover or edition may vary.
This is a used book - there is no escaping the fact it has been read by someone else and it will show signs of wear and previous use. Overall we expect it to be in very good condition, but if you are not entirely satisfied please get in touch with us.