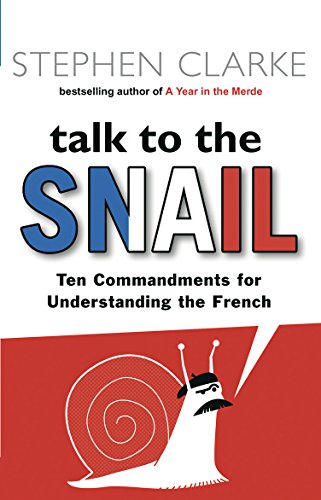 Talk to the Snail
by Stephen Clarke

In Stock
$13.49
inc. GST
Have you been taken to what you've been assured is the perfect house deep in the French countryside, only to find there's no electricity or running water?
Very Good Good
7 in stock

Talk to the Snail Summary

Talk to the Snail by Stephen Clarke

Have you been taken to what you've been assured is the perfect house deep in the French countryside, only to find there's no electricity or running water? Gone to the doctor with a nasty cough, and been diagnosed with a rather more personal complaint? Walked into an half-empty restaurant, only to be told that it's complet? If the answer to any of the above is oui, Talk to the Snail is the book for you.Find out how to get served in a restaurant; the best way to deal with French hypochondria; learn the language of love, sex and suppositories (not necessarily in that order); it's all here in this funny, informative, seriously useful guide on how to get what you really want from the French. With advice on essential phrases and bons mots to cover all eventualities, and illustrated with witty real-life anecdotes, Talk to the Snail is a book that no self-respecting Francophile - or Francophobe - can afford to be without. Don't go to France without reading this book. And don't even think of buying a house there.

Talk to the Snail Reviews

"Edgier than Bryson, hits harder than Mayle" * The Times *
"Done more for the Entente Cordiale than any of our politicians" * Daily Mail *
"Must have comedy-of-errors diary about being a Brit abroad" * Mirror *
"Clarke renders the flavor of life in Paris impeccably: the endless strikes, the sadistic receptionists, the crooked schemes by which the wealthy and well-connected land low-rent apartments... Clarke's eye for detail is terrific" * Washington Post *
"Call him the anti-Mayle. Stephen Clarke is acerbic, insulting, un-PC and mostly hilarious" * San Francisco Chronicle *

Stephen Clarke lives in Paris, where he divides his time between writing and not writing. His Merde novels have been bestsellers all over the world, including France. His non-fiction books include Talk to the Snail, an insider's guide to understanding the French; How the French Won Waterloo (or Think They Did), an amused look at France's continuing obsession with Napoleon; Dirty Bertie: An English King Made in France, a biography of Edward VII; and 1000 Years of Annoying the French, which was a number one bestseller in Britain. Research for The French Revolution and What Went Wrong took him deep into French archives in search of the actual words, thoughts and deeds of the revolutionaries and royalists of 1789. He has now re-emerged to ask modern Parisians why they have forgotten some of the true democratic heroes of the period, and opted to idolize certain maniacs. Follow Stephen on @SClarkeWriter and www.stephenclarkewriter.com

GOR001220189
Talk to the Snail by Stephen Clarke
Stephen Clarke
Used - Very Good
Paperback
Transworld Publishers Ltd
2007-07-02
272
0552773689
9780552773683
N/A
Book picture is for illustrative purposes only, actual binding, cover or edition may vary.
This is a used book - there is no escaping the fact it has been read by someone else and it will show signs of wear and previous use. Overall we expect it to be in very good condition, but if you are not entirely satisfied please get in touch with us.