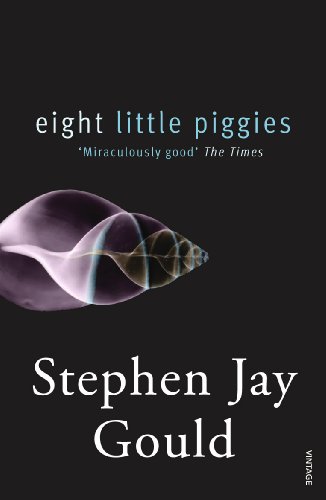 Out of Stock
$24.99
inc. GST
For millennia the animals that populated the earth had four toes on each foot, or six. If evolution had taken a tiny shift - if our ancestors had inherited a couple of genes in a different form - our canonical number, based on our fingers and toes, might be eight instead of ten. This book deploys this, which is one of the oddities of history.
Very Good
Only 0 left

No one illuminates the wonderful workings of the natural world as perceptively and enjoyably as Stephen Jay Gould. In this volume of reflections on biology, history and culture, Gould addresses the burning issues of ecological crisis and contemporary species extinctions as well as giving us fascinating insights into evolution - such as the fact that the first land vertebrates had up to eight toes on each foot, and that the ichthyosaur had a very significant kink in its tail.

Miraculously good * The Times *
Remarkable... Gould takes his readers on tough-minded rambles across the visible surface of things... extraordinary * Guardian *
Gould has a talent for making the scientific, and particularly the revolutionary, interesting and striking * Sunday Times *
A lovely mixture of bizarre facts, nice arguments, clever insights into the workings of evolution and a quality of writing that can make your skin prickle... Gould has given us a feast * Nature *
Rather than serving up his science cold, Gould invariably puts a spin on it, taking his readers down the innumerable byways of history, literature and personal anecdote along the route to his theoretical conclusions * Independent on Sunday *

Stephen Jay Gould was the Alexander Agassiz Professor of Zoology and Professor of geology at Harvard and the curator for invertebrate palaeontology in the university's Museum of Comparative Zoology. He died in May 2002.

GOR001019372
Eight Little Piggies: Reflections in Natural History by Stephen Jay Gould
Stephen Jay Gould
Used - Very Good
Paperback
Vintage Publishing
2007-02-01
480
0099507447
9780099507444
N/A
Book picture is for illustrative purposes only, actual binding, cover or edition may vary.
This is a used book - there is no escaping the fact it has been read by someone else and it will show signs of wear and previous use. Overall we expect it to be in very good condition, but if you are not entirely satisfied please get in touch with us.