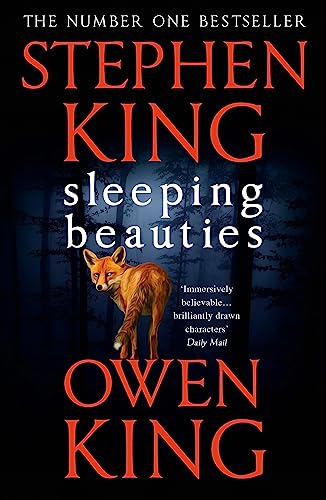 A spectacular father/son collaboration like no other, Stephen King and Owen King tell the highest of high stakes stories: what might happen if women disappeared from the world of men?

In this spectacular father/son collaboration, Stephen King and Owen King tell the highest of high-stakes stories: what might happen if women disappeared from the world of men?

All around the world, something is happening to women when they fall asleep; they become shrouded in a cocoon-like gauze. If awakened, if the gauze wrapping their bodies is disturbed, the women become feral and spectacularly violent...

In the small town of Dooling, West Virginia, the virus is spreading through a women's prison, affecting all the inmates except one. Soon, word spreads about the mysterious Evie, who seems able to sleep - and wake. Is she a medical anomaly or a demon to be slain?

The abandoned men, left to their increasingly primal devices, are fighting each other, while Dooling's Sheriff, Lila Norcross, is just fighting to stay awake.

And the sleeping women are about to open their eyes to a new world altogether...

No longer content with dominating the horror genre for decades, Stephen King now seems set on creating top-notch chillers as a family business....kick-started by a very Kingish high concept...made immersively believable by the usual Kingian control of a vast cast of brilliantly drawn characters. Bravo * Daily Mail *
'A beauty of a horror tale...The first epic collaboration between Stephen King and son Owen King is ambitious, heartbreaking and, when it comes to its central horrors, all too timely...The Kings create a thought-provoking work that examines a litany of modern-day issues * USA Today *
A bulging, colourful epic; a super-sized happy meal, liberally salted with supporting characters and garnished with splashes of arterial ketchup. -- Xan Brooks * Guardian *
Easily devoured, and I look forward to the next book from either or both Kings eagerly.... One of my favourite books of the year. * Sci-Fi Bulletin *
This delicious first collaboration between Stephen King (Doctor Sleep) and his son Owen (Intro to Alien Invasion) is a horror-tinged realistic fantasy that imagines what could happen if most of the women of the world fall asleep, leaving men on their own...The authors' writing is seamless and naturally flowing...once the action begins, it barrels along like a freight train' * Publishers Weekly *
The prose never loses its vitality and humour; the ideas are always intriguing; and there's no gainsaying the adventurousness and ambition * The Times *

Stephen King is the author of more than fifty books, all of them worldwide bestsellers.
His recent work includes The Bazaar of Bad Dreams, Mr Mercedes (an Edgar Award winner for Best novel), Finders Keepers and End of Watch.

Many of Stephen King's films have been turned into hugely successful movies and TV series including MISERY, THE SHAWSHANK REDEMPTION and IT.

He is the recipient of the 2014 National Medal of Arts and the 2003 National Book Foundation Medal for Distinguished Contribution to American Letters. He lives in Bangor, Maine, with his wife, novelist Tabitha King.

Owen King is the author of Double Feature, We're All in This Together: A Novella and Stories, and the co-editor of Who Can Save Us Now? Brand-New Superheroes and Their Amazing (Short) Stories.

Owen's writing has appeared in Grantland, One Story, The New York Times Book Review, Prairie Schooner, and Subtropics, among other publications.

Owen has also taught creative writing at Columbia University and Fordham University. He is married to the novelist Kelly Braffet.

GOR009063180
Sleeping Beauties by Stephen King
Stephen King
Used - Very Good
Paperback
Hodder & Stoughton General Division
2018-05-03
736
1473681286
9781473681286
N/A
Book picture is for illustrative purposes only, actual binding, cover or edition may vary.
This is a used book - there is no escaping the fact it has been read by someone else and it will show signs of wear and previous use. Overall we expect it to be in very good condition, but if you are not entirely satisfied please get in touch with us
Trustpilot