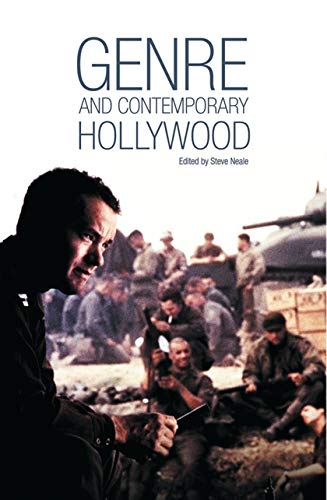 This wide-ranging text is one of the first to look in detail at some of the principal genres, cycles and trends in Hollywood's output during the last two decades. It includes analysis of such films as Sense and Sensibility, Grifters, The Mask, When Harry Met Sally, Pocahontas, Titanic, Basic Instinct, Coppola's Dracula, and Malcolm X.

This wide-ranging text is one of the first to look in detail at some of the principal genres, cycles and trends in Hollywood's output during the last two decades. It includes analysis of such films as Sense and Sensibility, Grifters, The Mask, When Harry Met Sally, Pocahontas, Titanic, Basic Instinct, Coppola's Dracula, and Malcolm X.
STEVE NEALE is a world-renowned authority on film genre and is Professor of Film Studies Sheffield Hallam University and is the author of Genre and Hollywood (Routledge, 2000) and co-editor of Contemporary Hollywood Cinema (Routledge, 1998).
CONTENTS 1. Introduction, by Steve Neale SECTION ONE: Genre: Tradition and Innovation 2. Tall Revenue Features: The Genealogy of the Modern Blockbuster, by Sheldon Hall 3. Westerns and Gangster Films Since the 1970s, by Steve Neale 4. The New Hollywood Musical: From Saturday Night Fever to Footloose, by J. P. Telotte 5. Some Smothering Dreams: The Combat Film in Contemporary Hollywood, by Mike Hammond 6. From Female Friends to Literary Ladies: The Contemporary Women's Film, by Karen Hollinger 7. Hollywood Lives: The State of the Biopic at the Turn of the Century, by Carolyn Anderson and Jon Lupo 8. From Paranoia to Postmodernism? The Horror Movie in Late Modern Society, by Andrew Tudor 9. The Impossibility of Romance: Hollywood Comedy, 1978-1999, by William Paul 10. Conforming Passions? Contemporary Romantic Comedy, by Frank Krutnik 11. Pleasing the million: Shakespearean Cinema of the Nineties, by Roberta Pearson SECTION TWO: Genre: New Cycles and Trends 12. Hollywood Production Trends in the Era of Globalization: 1990-99, by Tino Balio 13. The Best Disney Film Disney Never Made: Children's Films and the Family Audience in American Cinema Since the 1960s, by Peter Kramer 14. Movie Ratings as Genre: The Incontestable R, by Kevin Sandler 15. Cinema and the Premises of Youth: Teen Films and Their Sites in the 1980s and 1990s, by James Hay and Stephen Bailey 16. Ghetto Reelness: Hollywood Film Production, Black Popular Culture and the Ghetto Action Film Cycle, by S. Craig Watkins 17. 'Film Noir Like You've Never Seen': Jim Thompson Adaptations and Cycles of Neo-Noir, by Peter Stanfield 18. Grisham Adaptions and the Legal Thriller, by Keith Bartlett 19. Film Parody and the Rescuscitation of Genre, by Dan Harries 20. 'Gone With the Wind plus fangs': Genre, Taste and Distinction in the Assembly, Marketing and Reception of Bram Stoker's Dracula, by Thomas Austin Index
GOR002824378
9780851708874
0851708870
Genre and Contemporary Hollywood by Stephen Neale
Stephen Neale
Used - Very Good
Paperback
Bloomsbury Publishing PLC
2002-09-01
328
N/A
Book picture is for illustrative purposes only, actual binding, cover or edition may vary.
This is a used book - there is no escaping the fact it has been read by someone else and it will show signs of wear and previous use. Overall we expect it to be in very good condition, but if you are not entirely satisfied please get in touch with us
Trustpilot