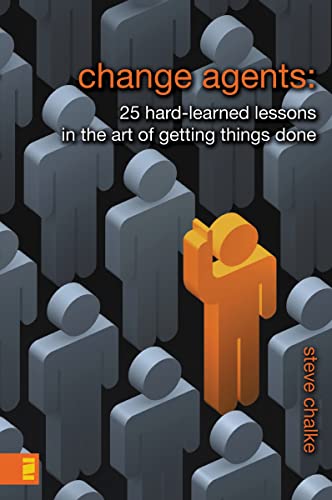 In Stock
$10.49
+10% GST
A change agent wants to alter the way the world works. Creative, driven, difficult, these people have visions that they wrench into reality. Steve Chalke turned a church into the hub of its inner-city community. In Change Agents, he shares lessons he learned---hard-won, wryly told, and immensely practical---as his vision took form and life.
Very Good
Only 2 left

Change Agents: 25 Hard-Learned Lessons in the Art of Getting Things Done by Steve Chalke

Change agents are pioneers, entrepreneurs, innovators. They can be difficult, annoying, and demanding. But their calling is demanding too: to take a vision and wrench it into reality. When Steve Chalke was asked to be the senior minister of a dying inner-city church, he knew what he wanted: to make it into a Christian equivalent of a first-century synagogue. A place where the community gathered, not just to pray and hear sermons, but to be educated, entertained, and find help. Making it all happen was the harder part. In Change Agents, the author shares twenty-five lessons he learned during this work. He had to teach himself to respond, not react; say no more than yes, give up being everyone's friend, and accept that any success was only a short respite between two crises. Employing wry humor, personal examples, and a large helping of practical advice, Steve Chalke reminds us our enterprise, not our caution, with the Word of God is what's rewarded. Christ waits and watches for us to take risks and create change in the church, the community, and the world at large.

Steve Chalke is an ordained minister and the founder of Oasis, which over the last 25 years has developed into a group of charities working to deliver education, training, youth work, health care and housing around the world. He is the senior minister of Church.co.uk, Waterloo and a UN Special Advisor working to combat people trafficking. In 2004 he was awarded an MBE by the Queen for his work in social inclusion.

GOR002663532
Change Agents: 25 Hard-Learned Lessons in the Art of Getting Things Done by Steve Chalke
Steve Chalke
Used - Very Good
Paperback
Zondervan
2007-09-21
128
0310275490
9780310275497
N/A
Book picture is for illustrative purposes only, actual binding, cover or edition may vary.
This is a used book - there is no escaping the fact it has been read by someone else and it will show signs of wear and previous use. Overall we expect it to be in very good condition, but if you are not entirely satisfied please get in touch with us.