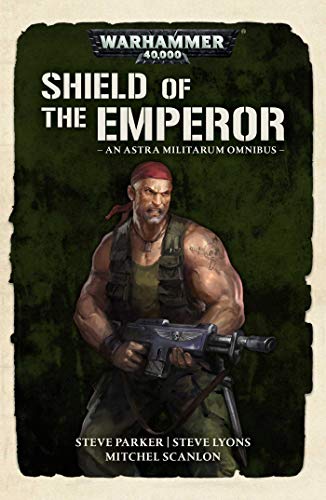 Shield of the Emperor
by Steve Parker

Shield of the Emperor Summary

Shield of the Emperor by Steve Parker

The Astra Militarum is the largest body of fighting men and women in the galaxy. Drawn from the myriad planets of the Imperium, it is the solemn duty of these grim soldiers to fight the wars of the Immortal Emperor against the many enemies that threaten the very existence of humanity. With incredible manpower, and supported by massive battle tanks and hordes of priests, clerks and engineers, it is an indomitable war machine, the Shield of the Emperor.

This anthology contains three novels - Fifteen Hours, Death World and Rebel Winter - each with its own associated short story. It is the ideal introduction to the Astra Militarum, and their struggles on the battlefields of the far future.

Customer Reviews - Shield of the Emperor

Mitchel Scanlon is a full-time novelist and comics writer. His previous credits for the Black Library include the Horus Heresy novel Descent of Angels, Fifteen Hours, the background book The Loathsome Ratmen, and the comics series Tales of Hellbrandt Grimm.

Steve Lyons' work in the Warhammer 40,000 universe includes the novellas Engines of War and Angron's Monolith, the Imperial Guard novels Ice World and Dead Men Walking - now collected in the omnibus Honour Imperialis - and the audio dramas Waiting Death and The Madness Within. He has also written numerous short stories and is currently working on more tales from the grim darkness of the far future.

GOR010607273
Shield of the Emperor by Steve Parker
Steve Parker
Used - Very Good
Paperback
Games Workshop
2019-06-27
816
178193987X
9781781939871
N/A
Book picture is for illustrative purposes only, actual binding, cover or edition may vary.
This is a used book - there is no escaping the fact it has been read by someone else and it will show signs of wear and previous use. Overall we expect it to be in very good condition, but if you are not entirely satisfied please get in touch with us.