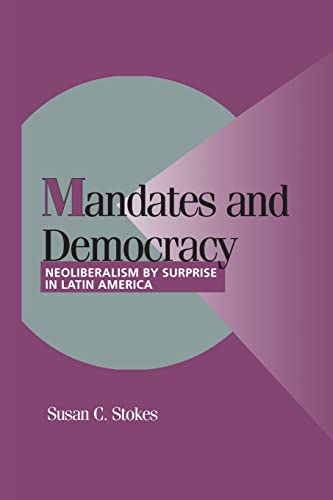 Mandates and Democracy
by Susan C. Stokes (University of Chicago)

Used Price
$49.99
inc. GST
Free Shipping in Australia
If politicians want to be reelected or see their party reelected at the end of their term, why would they impose unpopular policies? Susan Stokes develops a model of policy switches and tests it with statistical and qualitative data from Latin American elections over the last two decades.
Reviews:
Trustpilot
Very Good Good

Mandates and Democracy: Neoliberalism by Surprise in Latin America by Susan C. Stokes (University of Chicago)

Sometimes politicians run for office promising one set of policies, and if they win, switch to very different ones. Latin American presidents in recent years have frequently run promising to avoid pro-market reforms and harsh economic adjustment, then win and transform immediately into enthusiastic market reformers. Does it matter when politicians ignore the promises they made and the preferences of their constituents? If politicians want to be reelected or see their party reelected at the end of their term, why would they impose unpopular policies? Susan Stokes develops a model of policy switches and tests it with statistical and qualitative data from Latin American elections over the last two decades. She concludes that politicians may change policies because unpopular policies are best for constituents and best serve their own political ambitions. Nevertheless, even though good representatives sometimes switch policies, abrupt change tends to erode the quality of democracy.

"This methodologically sophisticated volume is an outstanding contribution to understanding mandate switching, and to theory building on the electoral and policymaking connection. It is well rooted in the contemporary literature on representation, but also in a deep understanding of the philosophical roots of mandate theories in the work of Edmund Burke, James Madison, and John Stuart Mill." Latin American Research Review
"Mandates and Democracy is a useful book for those concerned with Latin American democratic institutions and political behavior. Stokes's careful use of formal methodology combined with gestaltlich understanding of particular elections is a model that graduate and advanced undergraduate students would do well to emulate." Journal of Politics
"Stokes's work is impressive for its all-too-rare combination of posing questions inspired by normative theory...Few scholars have a comparable vision and set of tools with which to address the implications for democracy when citizens are deprived of the opportunity to express themselves on the political alternatives available to them. With Mandates and Democracy...Stokes cements her position as one of the leading contemporary scholars of comparative democracy." Political Science Quarterly
"...nuanced and sophisticated.... Stokes leads scholars toward the analysis of crucial and ideational phenomena and thus breaks new ground for comparative politics." Perspectives on Politics
"This exceedingly timely volume presents solid scholarship and thus is broadly recommended." Choice
"Stokes is thus able to classify election campaigns as either efficiency-oriented, that is, in favor of market reforms, or welfare-oriented, that is, against them." Comparative Politics, Andrew Roberts, The Quality of Politics _

GOR010625200
Mandates and Democracy: Neoliberalism by Surprise in Latin America by Susan C. Stokes (University of Chicago)
Susan C. Stokes (University of Chicago)
Cambridge Studies in Comparative Politics
Used - Very Good
Paperback
Cambridge University Press
2001-08-13
238
0521805112
9780521805117
Winner of Best Book Award, Comparative Democratization Section, American Political Science Association 2003 Winner of George H. Hallett Award, Representation and Electoral Systems Section, American Political Science Association 2016 Joint winner of Mattei Dogan Foundation Prize in European Political Sociology, Society of Comparative Research 2002
Book picture is for illustrative purposes only, actual binding, cover or edition may vary.
This is a used book - there is no escaping the fact it has been read by someone else and it will show signs of wear and previous use. Overall we expect it to be in very good condition, but if you are not entirely satisfied please get in touch with us.