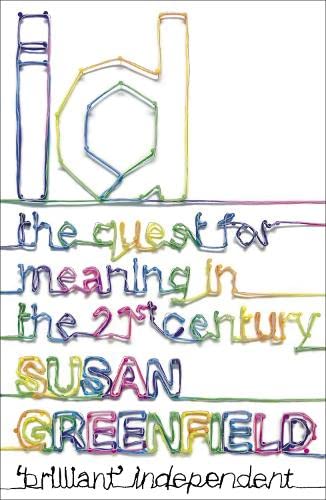 In Stock
$16,49
inc. GST
A stark warning from one of the world's leading neuroscientists about the threats to our individuality from modern living and what we can do about it.
Very Good Well Read
Only 2 left

If you've ever wondered what effect video games have on your children's minds or worried about how much private information the government and big companies know about you, ID is essential reading.

Professor Susan Greenfield argues persuasively that our individuality is under the microscope as never before; now more then ever we urgently need to look at what we want for ourselves as individuals and for our future society.

ID is an exploration of what it means to be human in a world of rapid change, a passionately argued wake-up call and an inspiring challenge to embrace creativity and forge our own identities.

Susan Greenfield is often described as the foremost female scientist in Britain, but she is one of the best of any gender, anywhere, at getting complicated ideas across * Independent on Sunday *
Greenfield is an entertaining writer, a brilliant neuroscientist and an excellent exponent of the latest advances in brain chemistry * New Humanist *
Susan Greenfield enthrals and intrigues her readers in equal measure . . . a force of intellect and a force of nature * John Humphrys *
Asks good questions, describes intriguing facts and makes some interesting suggestions * Financial Times *
she is so fluent and persuasive a writer that just reading this important book perks up the grey cells * Telegraph *

Baroness Susan Greenfield is Professor of Pharmacology at Oxford University and Director of the Royal Institution. She is also an Honorary Fellow of the College of Physicians and has received 24 honorary degres from universities all over the world. Neuroscientist, broadcaster and author, she has received the Michael Faraday medal from the Royal Society for developing public understanding of science and made the Daily Mail's 100 Most Influential Women in Britain list in 2003. She received a CBE and a life peerage in 2001 and was awarded the L'Ordre National de la Legion d'Honneur in 2003. In 2004/5 she was 'thinker in residence' reporting to the Premier of South Australia. She is based in Oxford.

GOR001459377
ID by Susan Greenfield
Susan Greenfield
Used - Very Good
Paperback
Hodder & Stoughton General Division
2009-04-02
320
0340936010
9780340936016
N/A
Book picture is for illustrative purposes only, actual binding, cover or edition may vary.
This is a used book - there is no escaping the fact it has been read by someone else and it will show signs of wear and previous use. Overall we expect it to be in very good condition, but if you are not entirely satisfied please get in touch with us.