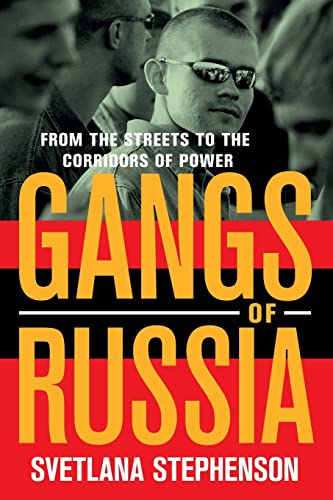 Gangs of Russia
by Svetlana Stephenson

Using in-depth interviews with gang members, law enforcers, and residents in the city of Kazan, together with analyses of historical and sociological accounts from across Russia, Svetlana Stephenson presents the history of gangs in Russia both before and after the arrival of market capitalism.

Gangs of Russia: From the Streets to the Corridors of Power by Svetlana Stephenson

Since their spectacular rise in the 1990s, Russian gangs have remained entrenched in many parts of the country. Some gang members have perished in gang wars or ended up behind prison bars, while others have made spectacular careers off the streets and joined the Russian elite. But the rank and file of gangs remain substantially incorporated into their communities and society as a whole, with bonds and identities that bridge the worlds of illegal enterprise and legal respectability.

In Gangs of Russia, Svetlana Stephenson explores the secretive world of the gangs. Using in-depth interviews with gang members, law enforcers, and residents in the city of Kazan, together with analyses of historical and sociological accounts from across Russia, she presents the history of gangs both before and after the arrival of market capitalism.

Contrary to predominant notions of gangs as collections of maladjusted delinquents or illegal enterprises, Stephenson argues, Russian gangs should be seen as traditional, close-knit male groups with deep links to their communities. Stephenson shows that gangs have long been intricately involved with the police and other state structures in configurations that are both personal and economic. She also explains how the cultural orientations typical of gangs-emphasis on loyalty to one's own, showing toughness to outsiders, exacting revenge for perceived affronts and challenges-are not only found on the streets but are also present in the top echelons of today's Russian state.

"[I]n her landmark study, Gangs of Russia: From the Streets to the Corridors of Power, Svetlana Stephenson finds an analytical similarity between the two types of organizations: like the Mafia, gangs in Russia are woven into the fabric of society. They have roots in the community and instead of challenging the established order, they reinforce it... Stephenson finds that most of her interviewees had finished high school, were studying at university (in some cases, medicine and law), or held professional jobs. They do not come from broken homes and are in steady relationships. Many are married. Some even belong to belong to political parties, such as the pro-Putin United Russia, and have relatives working for the police. Over time, a number of them become respected businessmen and even local politicians."

"A recent and valuable contribution to this field of study is Dr. Svetlana Stephenson's book Gangs of Russiaa fine expose that contributes much to our understanding of the very roots of the reality of Russia 'corruption [...] violence and crime.'"

"This rich, absorbing work should impel readers to ask questions about political and economic transitions... this research offers a powerful caveat with regard to building such systems based on mass immiseration."

"This is a history of the growth and partial assimilation of youth gangs in Russia after the collapse of Soviet socialism... highly recommended."

"Stephenson's account of gang life has much to offer, and the complications in pursuing this research may have been truly staggering. The result is an exhaustive - but never exhausting - account of the multifaceted nature of Russian gang life - including a fascinating section on the fleeting existence of a handful of all-female street gangs."

Svetlana Stephenson is Reader in Sociology at London Metropolitan University. She is the author of Crossing the Line: Vagrancy, Homelessness and Social Displacement in Russia and coeditor of Youth and Social Change in Eastern Europe and the Former Soviet Union.

Introduction: In the Shadow of the State1. Street Organizations and Gangs in Russia2. The Transformation of Gangs in the 1990s3. The Business of Bandit Gangs: From Predation to Assimilation4. Gang Organization5. Street Trajectories6. The Gang in the Community7. Life according to the Poniatiia: The Gang's Code8. Navigating the World of Violence9. Gang Culture and the Wider Russian SocietyConclusion: Out of the Shadows?Appendix. Development of Tatarstan Gangs: Three Examples
Key to Interviewees
Methodological Note
Glossary
References
Index

GOR008960977
Gangs of Russia: From the Streets to the Corridors of Power by Svetlana Stephenson
Svetlana Stephenson
Used - Very Good
Paperback
Cornell University Press
2015-08-04
288
1501700243
9781501700248
N/A
Book picture is for illustrative purposes only, actual binding, cover or edition may vary.
This is a used book - there is no escaping the fact it has been read by someone else and it will show signs of wear and previous use. Overall we expect it to be in very good condition, but if you are not entirely satisfied please get in touch with us.