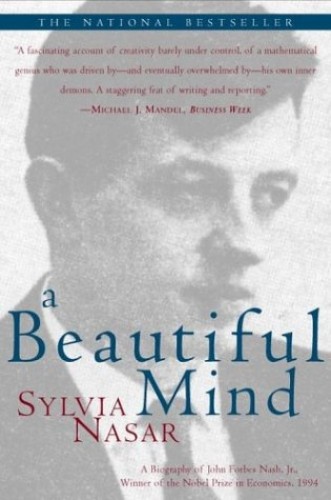 A Beautiful Mind
by Sylvia Nasar

In Stock
$16.49
inc. GST
The dramatic story of John Forbes Nash, Jr., a mathematical genius who slipped into madness at the height of his career, endured three decades of schizophrenia, and, after a miraculous recovery, was awarded the Nobel Prize for his groundbreaking work. of photos. Index.
Very Good Good
Only 1 left

A Beautiful Mind: A Biography of John Forbes Nash, Jr., Winner of the Nobel Prize in Economics, 1994 by Sylvia Nasar

In this powerful and dramatic biography Sylvia Nasar vividly re-creates the life of a mathematical genius whose career was cut short by schizophrenia and who, after three decades of devastating mental illness, miraculously recovered and was honored with a Nobel Prize. "A Beautiful Mind" traces the meteoric rise of John Forbes Nash, Jr., a prodigy and legend by the age of thirty, who dazzled the mathematical world by solving a series of deep problems deemed "impossible" by other mathematicians.

But at the height of his fame, Nash suffered a catastrophic mental breakdown and began a harrowing descent into insanity, resigning his post at MIT, slipping into a series of bizarre delusions, and eventually becoming a dreamy, ghostlike figure at Princeton, scrawling numerological messages on blackboards. He was all but forgotten by the outside world -- until, remarkably, he emerged from his madness to win world acclaim. A feat of biographical writing, "A Beautiful Mind" is also a fascinating look at the extraordinary and fragile nature of genius.

[Sylvia Nasar] has written a biography of John Nash that reads like a fine novel.

"[A Beautiful Mind]" might be compared to a Rembrandt portrait, filled with somber shadows and radiant light effects...superbly written and eminently fascinating...simply a beautiful book.

"The New England Journal of Medicine"

Nasar has written an intriguing account of a fascinating man, of a "beautiful" mind, and of terrible madness. She has also written a deeply moving love story, an account of the centrality of human relationships in a world of nightmare and genius.

After suffering with Mr. Nash's family through his madness, the reader greets his recovery -- and his ability to reforge a bond with his wife -- as a triumph..."A Beautiful Mind" is one of the few scholarly biographies I have encountered that could plausibly be described as a three-handkerchief read.

Nash's life has been a remarkable mental journey. Nasar's first-rate biography describes that journey for us.

A fascinating overview of [Nash's] life and the intellectual history of his times...a wonderfully absorbing puzzle.

"A Beautiful Mind" tells a moving story and offers a remarkable look into the arcane world of mathematics and the tragedy of madness.

A fascinating account of creativity barely under control, of a mathematical genius who was driven by -- and eventually overwhelmed by -- his own inner demons. A staggering feat of writing and reporting.

GOR001656341
A Beautiful Mind: A Biography of John Forbes Nash, Jr., Winner of the Nobel Prize in Economics, 1994 by Sylvia Nasar
Sylvia Nasar
Used - Very Good
Paperback
Simon & Schuster
1999-06-28
459
0684853701
9780684853703
Short-listed for Helen Bernstein Book Award 1999
Book picture is for illustrative purposes only, actual binding, cover or edition may vary.
This is a used book - there is no escaping the fact it has been read by someone else and it will show signs of wear and previous use. Overall we expect it to be in very good condition, but if you are not entirely satisfied please get in touch with us.