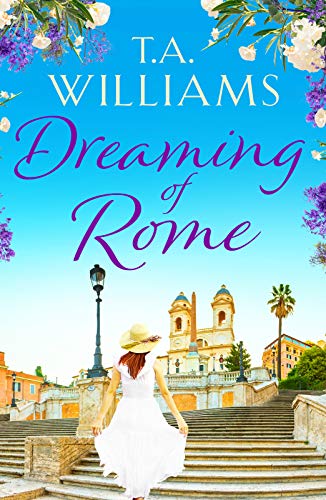 Dreaming of Rome
by T.A. Williams

Rome is where the heart is... The heartwarming read of the summer

Jo has had enough of handsome men. After a painful break-up, she's decided she doesn't believe in love.

Then, while on a professional trip to the magical city of Rome, she meets Corrado, a scientist and her brother-in-law to be, who doesn't believe in love either. To him, it's just a biochemical reaction. So what's the problem?

Well, he's gorgeous for a start, as well as charming, generous, intelligent and attentive, and she feels herself immediately falling for him, despite her new outlook.

The majesty of the Eternal City brings them ever closer together. But is their relationship doomed, or will love conquer all?

Heartbreaking and hilarious in equal measure, Dreaming of Rome is a joyous and uplifting read from T.A. Williams, perfect for fans of Holly Martin, Tilly Tennant and Jenny Oliver

Praise for T A Williams

'An intelligent will they won't they novel that leaves you guessing almost to the very end!' Reader review

T.A. Williams lives in Devon with his Italian wife. He was born in England of a Scottish mother and Welsh father. After a degree in modern languages at Nottingham University, he lived and worked in Switzerland, France and Italy, before returning to run one of the best-known language schools in the UK. He's taught Arab princes, Brazilian beauty queens and Italian billionaires. His hobby is long-distance cycling, but his passion is writing.

GOR010828878
Dreaming of Rome: An unputdownable feel-good holiday romance by T.A. Williams
T.A. Williams
Used - Very Good
Paperback
Canelo
2020-04-02
352
178863831X
9781788638319
N/A
Book picture is for illustrative purposes only, actual binding, cover or edition may vary.
This is a used book - there is no escaping the fact it has been read by someone else and it will show signs of wear and previous use. Overall we expect it to be in very good condition, but if you are not entirely satisfied please get in touch with us.