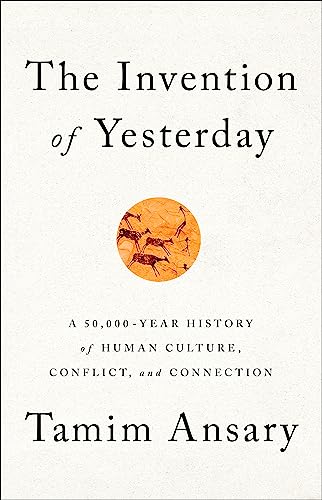 The Invention of Yesterday by Tamim Ansary

A sweeping global human history that describes the separate beginnings of the world's major civilisations and cultural movements and the dramatic, sometimes ruinous, sometimes transformative effects of their ever closer intertwinement that has brought us to where we are today.

The Invention of Yesterday: A 50,000-Year History of Human Culture, Conflict, and Connection by Tamim Ansary

Forty thousand years ago, the human species existed as thousands of small, virtually autonomous bands, roaming a world almost entirely untouched their presence, each band in contact with a few neighbors but unaware of the thousands of others spread across the planet. Today, no life can unfold in isolation from the general flux and flow of human activity. Every habitable inch of the planet is inhabited by humans, there is no place left untouched by our presence, and events anywhere on this planet can have consequences felt by people anywhere else on this planet. The center of the world no longer seems to be this place or that place but the system as a whole.

This journey - from vulnerable small groups to a planet-encompassing hive - is the subject of Tamim Ansary's elegant and gripping history. His object is not just to describe the journey, but to illuminate origins of distinct ways of understanding the world, organizing ourselves, and making sense of what we experience. What each of us sees when we look up at the stars-or at the political landscape of this moment-is shaped by a narrative begun many thousands of years ago; and by the environment, tools, and language that informed that narrative. Ansary also reveals our various gods and laws, our rulers and bankers, our philosophers and outcasts, each of which is a continuous presence in the various global cultures. They are the survivors in the human drama, whereas nation states, corporations, policies and political ideas are all susceptible to violent upheaval and dramatic erasure.

Our current moment, Ansary shows, is one of revolutionary reinvention, as old habits are cast aside and reconfigured by the ever more intertwined world we have created. The whole of human history, after all, has been leading up to it.

Tamim Ansary is the author of Destiny Disrupted and Games without Rules, among other books. For ten years he wrote a monthly column for Encarta.com, and has published essays and commentary in the San Francisco Chronicle, Salon, Alternet, TomPaine.com, Edutopia, Parade, Los Angeles Times, and elsewhere. He has appeared on the Oprah Winfrey Show, Bill Moyers, PBS The News Hour, Al Jazeera, and NPR. Born in Afghanistan in 1948, he moved to the U.S. in 1964. He lives in San Francisco.
GOR011139441
The Invention of Yesterday: A 50,000-Year History of Human Culture, Conflict, and Connection by Tamim Ansary
Tamim Ansary
Used - Like New
Hardback
PublicAffairs,U.S.
2019-10-31
448
1610397967
9781610397964
N/A
Book picture is for illustrative purposes only, actual binding, cover or edition may vary.
The book has been read, but looks new. The book cover has no visible wear, and the dust jacket is included if applicable. No missing or damaged pages, no tears, possible very minimal creasing, no underlining or highlighting of text, and no writing in the margins
Trustpilot