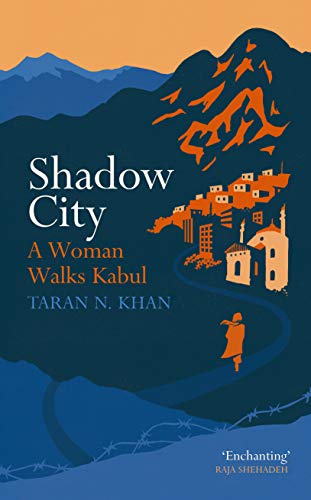 'Any reader of this book is sure to discover a Kabul so unlike what the media portrays. Taran's love of her city comes across in her enchanting evocation of a city where so many tragedies echo from across Kabul's decades of war' Raja Shehadeh, author of Palestinian Walks

One of the first things I was told when I arrived in Kabul was never to walk...

When Indian journalist Taran Khan arrives in Kabul in 2006, she imagines it as a return to the land her forebears hailed from centuries ago. It is a city both familiar and unknown. She finds an unexpected guide in her grandfather who - despite never visiting the city - knows it intimately through books and stories, poetry and myth. With his voice in her head, and falling in with poets, doctors, actors and other Kabulis, Khan uncovers a place quite different from the one she anticipated.

Her wanderings reveal a fragile city in a state of flux: stricken by near-constant war, but flickering with the promise of peace, a shape-shifting place governed by age-old codes but experimenting with new modes of living. These walks take her to the unvisited tombs of the dead, and to the land of the living: the booksellers, archaeologists, intrepid film-makers and entrepreneurs who are remaking and rebuilding this ancient 3,000-year-old city.

Lost in its labyrinthine streets Khan reads the city more closely, excavating the ghostly iterations of Kabul's past and its layers of forgotten memories - unearthing a city that has been brutally erased and redrawn as each new war sweeps through. And as NATO troops begin to withdraw from the country, Khan watches as her friends and comrades also prepare to depart, and the cycle of transformation begins again. Filled with unique insights about the meaning of home and the haunting power of loss and absence, Taran Khan conjures a magic that is spellbinding and utterly her own.

Offers a unique on-the-ground view of the city...a refreshing counterpoint to the macho foreign correspondent genre... Khan's interviews during her walks powerfully evoke the fluctuating mood in a city that is trying to heal itself -- Amelia Gentleman * Guardian *
These stories conjure a magic in the labyrinthine streets and reveal a fragile city in a state of flux, shape-shifting and flickering with the promise of peace -- Sophie Lam * i *
Any reader of this book is sure to discover a Kabul so unlike what the media portrays. Taran's love of her city comes across in her enchanting evocation of a city where so many tragedies echo from across Kabul's decades of war. On her last walk, she writes: "to leave Kabul was to take it with you." This is what happened when I finished reading this book, I took Kabul with me -- Raja Shehadeh, author of Palestinian Walks
By excavating Afghanistan's forgotten past, Khan rescues its future, too. Her lyrical prose brings to life the most daring truth a writer can offer: that these tragedies were not preordained, and another Afghanistan is possible -- Anand Gopal, author of No Good Men Among the Living
A lyrical discovery... As a Muslim woman from India, Khan is able to present a unique social and historical perspective -- Edward Girardet * Global Geneva *
Taran Khan invites and leads us into a wonderful journey through the streets of Kabul, its history and culture. Step by step with her, we breathe in the city's air of mysticism and mystery, walk through gardens full of myths and secrets, and we caress the wounds and scars of war on the skin of the city and cross the bridge that is built over the river between Indo-Greek civilization -- Atiq Rahimi
Shadow City moved me to tears... In the service of Kabul and Afghanistan, a region of the world about which we imagine we know much more than we actually do, no book has done a more honest and heart-warming job in recent years... Thrilling -- Supriya Nair * Mumbai Mirror *
Traces the lost glory of the city and narrates contemporary miseries. A moving memoir...and a subtle dive into history -- Ashutosh Bhardwaj * Financial Express *
Sparkling...a city and a part of the world that is particularly suited to the elegy... The Kabul stories Khan collects are like that: silent screams for a city that was and the city it could be -- Vikram Shah * Mint Lounge *
An intricate, intimate portrait of a heartbreaking city, its people and its past, written with nuance, love and attention. In her multi-dimensional memoir Taran Khan explores Kabul as she wanders - through its streets but also its literature, its politics but also its passions - revealing as she does her own exacting, compassionate sense of what the city was and can still be -- Alice Albinia, author of Empires of the Indus
Through these deep and compassionate portraits of ordinary people who call Kabul home, Taran Khan tells the story of the city through war and peace as never told before. At a time when deep uncertainly hangs over Afghanistan's future once again, Shadow City provides an invaluable perspective on life in its capital -- Snigdha Poonam
Khan asks important questions of cities that have witnessed trauma in the palimpsests of what remains. The book carries valuable insights into the effects of war -- the fragility of books, films, ways of life; addiction as a war wound; the instability of 'home'. Mostly, it reminds us of the power of words to represent ways of seeing * India Today *

Taran N. Khan is a journalist and non-fiction writer based in Mumbai. Her writing has appeared in Guernica, Al Jazeera, Berfrois, Himal Southasian, Gulf News and Dagsavisen, as well as in leading publications in India like The Caravan, Open, The Hindu and Scroll.in. She has received fellowships from the MacDowell Colony, Logan Non-Fiction Program, Jan Michalski Foundation and Pro Helvetia. From 2006 to 2013, Khan spent long periods living and working in Kabul. Shadow City is her first book.

GOR010226573
Shadow City: A Woman Walks Kabul by Taran Khan
Taran Khan
Used - Very Good
Hardback
Vintage Publishing
2019-12-05
272
1784742287
9781784742287
N/A
Book picture is for illustrative purposes only, actual binding, cover or edition may vary.
This is a used book - there is no escaping the fact it has been read by someone else and it will show signs of wear and previous use. Overall we expect it to be in very good condition, but if you are not entirely satisfied please get in touch with us.