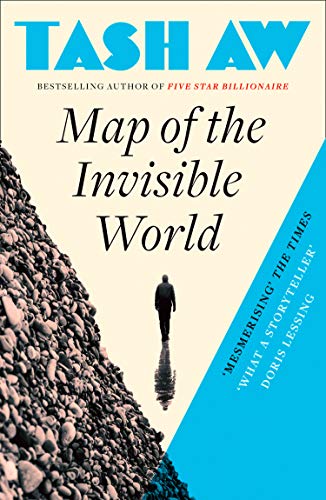 Map of the Invisible World
by Tash Aw

From the author of the internationally acclaimed, Whitbread Award-winning `The Harmony Silk Factory' comes an enthralling new novel that evokes an exotic yet turbulent and often frightening world.

Map of the Invisible World Summary

Map of the Invisible World by Tash Aw

From the author of the internationally acclaimed, Whitbread Award-winning `The Harmony Silk Factory' comes an enthralling new novel that evokes an exotic yet turbulent and often frightening world.

Sixteen-year-old Adam is an orphan three times over. He and his older brother, Johan, were abandoned by their mother as children; he watched as Johan was adopted and taken away by a wealthy couple; and he had to hide when Karl, the Dutch man who raised him, was arrested by soldiers during Sukarno's drive to purge 1960s Indonesia of its colonial past.

Adam sets out on a quest to find Karl, but all he has to guide him are some old photos and letters, which send him to the colourful, dangerous capital, Jakarta. Johan, meanwhile, is living a seemingly carefree, privileged life in Malaysia, but is careening out of control, unable to forget the long-ago betrayal of his helpless, trusting brother.

`Map of the Invisible World' is a masterful novel, and confirms Tash Aw as one of the most exciting young writers at work today.

Map of the Invisible World Reviews

'Aw's first novel was a sublime piece of work that Doris Lessing called "unputdownable". She will find this one similarly mesmerising...This is absolutely stunning writing - Aw is emerging as a master storyteller.' The Times

'Aw's prose can be powerful and mesmerising in its sense of place...and psychological acuity. Haunting and memorable.' Maya Jaggi, Guardian

'Aw is a writer of great power and delicacy, as able to conjure stampeding crowds as the glow of fireflies.' Daily Mail

'His prose is vividly lyrical; and one can almost feel the heat and smell the sweat of Jakarta and Kuala Lumpur.' Independent

'Buoyant, limber, confidently told...a book embodying huge ambition, jostling with love, betrayal and guilt, all set poignantly and subtly against the politics of turmoil in post-colonial Indonesia circa 1964.' Scotsman

`An intelligent second novel...Aw's characteristic tone is a fine lyricism that, at best owes something to Michael Ondaatje or Anne Michaels...Aw has an exceptional talent for set pieces.' Sunday Telegraph

Tash Aw was born in Taipei, in the Republic of China, and
brought up in Malaysia. He moved to England in his teens and
now lives in London. He is the author of `The Harmony Silk Factory', which was the winner of the Whitbread First Novel Award and the Commonwealth Writers' Prize for Best First Novel and was longlisted for the Man Booker Prize, and `Map of the Invisible World'. His most recent novel, `Five Star Billionaire', was longlisted for the Man Booker Prize 2013.

GOR001970465
Map of the Invisible World by Tash Aw
Tash Aw
Used - Very Good
Paperback
HarperCollins Publishers
2010-04-01
400
000734998X
9780007349982
N/A
Book picture is for illustrative purposes only, actual binding, cover or edition may vary.
This is a used book - there is no escaping the fact it has been read by someone else and it will show signs of wear and previous use. Overall we expect it to be in very good condition, but if you are not entirely satisfied please get in touch with us.