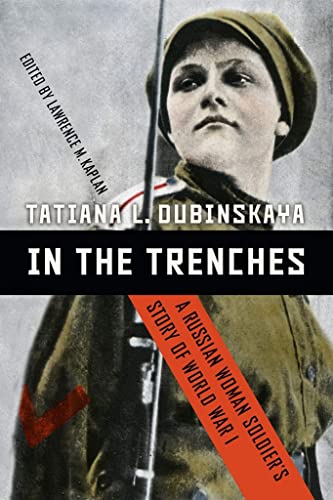 In the Trenches by Tatiana Dubinskaya

Set in Russia in the year 1916, In the Trenches is based on the true story of the author's life during WWI. Fifteen-year-old Zina runs away from home to serve on the Eastern Front as a soldier in the Russian army.

In the Trenches: A Russian Woman Soldier's Story of World War I by Tatiana Dubinskaya

Tatiana L. Dubinskaya was a schoolgirl who ran away from home and served on the Eastern Front from 1916-17 as a soldier in the Russian army during World War I. She later became a writer and in 1930 recounted her personal experiences as a soldier in an autobiographical novel, called In the Trenches, published in Moscow. In 1936 she revised and republished a shorter version of her story under a new title, Machine Gunner. Both versions of her novel had much in common. Most of the characters and much of the storyline remained essentially the same, but there were a few notable exceptions, which included the addition of more revolutionary zeal to the main characters in Machine Gunner, which likely gave it greater appeal in Stalinist Russia. This revised edition of In the Trenches has been edited using select portions from Machine Gunner to provide greater clarity and context to Dubinskaya's original story. In the Trenches received critical acclaim when first published, being favorably compared with Erich Maria Remarque's 1929 classic World War I novel, All Quiet on the Western Front, which portrayed the stark realism of life in the trenches through the eyes of a young German soldier. Dubinskaya's character, Zinaida "Zina" Kramskaya, had similar experiences. In the Trenches was significant as it marked the first major account of a female soldier from World War I to be published in Russia. In April 1930 the United Press International reported that an American publisher had acquired the rights for an English edition of In the Trenches, but it never went into print. Russian censorship may have stopped the English edition. In the novel, Zina develops close ties to her brothers in arms, endures the hardships and stresses of war, is exposed to the undercurrents of revolutionary thinking in the ranks, and comes to grips with the disruptive effects of the czar's abdication in March 1917, which led to the wide-scale spread of a socialist revolution in the army. After returning home for a visit with her family, she wrestles with remaining and returning to a normal life. Eventually, she is drawn back to the theater of war. Back at the front in the wake of a revolution that overthrew the czar and the Romanov dynasty, she sees widespread changes sweeping across the army. The revolution has brought a provisional socialist government to power whose new policies cause havoc in the army. Soldiers' committees emerge to challenge traditional authority from the officers, and in some cases disgruntled soldiers summarily execute unfavorable officers without facing any repercussions. These sudden changes cause a massive destabilization in the army that leads many soldiers to desert and return home, including Zina's regiment. Although she was exposed to revolutionary propaganda, she is not an ardent revolutionary. Her story ends abruptly in the summer of 1917, several months before the November 1917 Bolshevik revolution.
Tatiana L. Dubinskaya (1902-90) served in the Russian army until 1917, then became a soldier and a nurse for the Red Army during the Russian Civil War (1917-22). After the civil war, she worked as a typist for the Red Army in Moscow and later became a writer. The Communist Party sent her to Tajikistan in 1931, and on her return to Moscow, she became active with the Union of Soviet Writers, earning a reputation as a Communist Party informant. Lawrence M. Kaplan is a military historian and the author of Homer Lea: American Soldier of Fortune and the editor of Pershing's Tankers: Personal Accounts of the AEF Tank Corps in World War I, among other books.

NGR9781640121966
9781640121966
164012196X
In the Trenches: A Russian Woman Soldier's Story of World War I by Tatiana Dubinskaya
Tatiana Dubinskaya
New
Paperback
University of Nebraska Press
2020-03-01
208
N/A
Book picture is for illustrative purposes only, actual binding, cover or edition may vary.
This is a new book - be the first to read this copy. With untouched pages and a perfect binding, your brand new copy is ready to be opened for the first time
Trustpilot