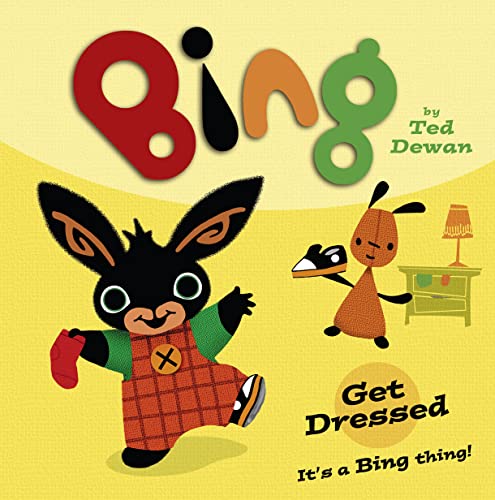 Bing: Get Dressed
by Ted Dewan

The first in an exciting new relaunch of Ted Dewan's Bing books - resized and beautifully produced for the next generation of toddlers - paving the way for Bing's TV debut in 2014.

Bing: Get Dressed by Ted Dewan

The first in an exciting new relaunch of Ted Dewan's Bing books - resized and beautifully produced for the next generation of toddlers - paving the way for Bing's TV debut in 2014.

Ted Dewan has created a series that focuses on the dynamic between toddler and parent, and that speaks to them both equally, about life as a toddler and life with a toddler. With short, repetitive texts, bold, bright artwork and appealing characters, Bing offers both parent and child an enjoyable reading experience and a simple, reassuring guiding principle - that, whatever happens, it's just a Bing thing, a normal occurrence, and nothing to get upset about.

Getting dressed is an important life skill to learn. It's also really difficult! It's hard to know which bit of your body goes into which hole! Clever Bing has mastered putting on his his clothes (with a little help from his constant companion Flip), but he's struggling with the right order. And when he's fully dressed, uh-oh, he has an accident. Don't worry, Bing. It's no big thing. Just get dressed all over again! That's the Bing thing.

"My 4 year old loved this book as a toddler and my 2 year old loves this book too. Bing is so funny and if you read it the way it's written, it's hilarious to kids!"

"Any toddler will love these books. My thirteen month old adores them, and brings them to me so that we can read them together. Colourful, funny...an absolute must for any baby!!"

"Initially I found Bing Bunny a little bizarre - but then I am an adult and not in the core target group.....my 2 year old absolutely adores it and has opened my eyes to Bing's charms."

"My 28-month-old son LOVES Bing Bunny and Flop more than any other book character!!!!! Sometimes I have to read these books over and over in one setting. They have really nurtured my son's love of books. Thank-you Ted Dewan!"

" I have been a professional child-carer for 20 years. The Ted Dewan Bing Bunny books have been a firm favourite with my under 3s. Some of their first words come from the stories."

Ted Dewan is an internationally acclaimed award-winning Anglo/American author/illustrator and artist. He is best known as creator of the Emmy-Award-winning animated television series Bing currently screening in over 80 countries. His work ranges from cult picture books to large-scale steampunk exhibition pieces and fiery public art installations. His work centres around the theme of celebrating young people's imagination, and how adults can apply their imagination to work and life. He lives in London.
Visit Ted's website at: www.teddewan.com

GOR005255081
Bing: Get Dressed by Ted Dewan
Ted Dewan
Used - Very Good
Paperback
HarperCollins Publishers
2013-08-01
32
0007514778
9780007514779
N/A
Book picture is for illustrative purposes only, actual binding, cover or edition may vary.
This is a used book - there is no escaping the fact it has been read by someone else and it will show signs of wear and previous use. Overall we expect it to be in very good condition, but if you are not entirely satisfied please get in touch with us.