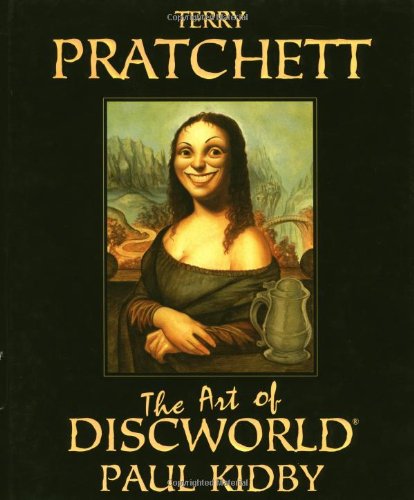 The Art of Discworld
by Terry Pratchett

Out of Stock
$20.99
+10% GST
A sumptuous illustrated journey through Terry Pratchett?s DISCWORLD; a companion volume to THE LAST HERO
Very Good
Only 0 left

The Art of Discworld Summary

The Art of Discworld by Terry Pratchett

In THE ART OF DISCWORLD, Terry Pratchett takes us on a guided tour of the Discworld, courtesy of his favourite Discworld artist, Paul Kidby. Following on from THE LAST HERO, THE ART OF DISCWORLD is a lavish 112-page large format, sumptuously illustrated look at all things Discworldian. Terry Pratchett provides the written descriptions while Paul Kidby illustrates the world that has made Pratchett one of the best-selling authors of all time. Here you will find favourites old and new: the City Watch, including Vimes, Carrot and Angua, the three witches - Granny Weatherwax, Nanny Ogg and Magrat Garlick - and the denizens of the Unseen University Library, not forgetting the Librarian, of course: they're all here in sumptuous colour, together with the places: Ankh-Morpork, Lancre, Uberwald and more . . .
No Discworld fan will want to be without this beautiful gift book.

Terry Pratchett (Author)
Sir Terry Pratchett is a publishing phenomenon. Among his many prizes and citations are the World Fantasy Life Achievement Award, the Carnegie Medal, the BSFA Award, eight honorary doctorates and, of course, a knighthood. In 2012, he won a BAFTA for his documentary on the subject of assisted suicide, 'Terry Pratchett: Choosing to Die'. He is the author of fifty bestselling books but is best known for the globally renowned Discworld series.

The first Discworld novel, The Colour of Magic, was published in 1983, and the series is still going strong almost three decades later. Four Discworld novels - Hogfather, Going Postal, The Colour of Magic and The Light Fantastic - have been adapted for television, with more to follow. His books have sold approximately 85 million copies worldwide (but who's counting?), and been translated into forty languages.

In 2007, Terry Pratchett was diagnosed with early onset Alzheimer's Disease. He died in 2015.

Paul Kidby (Illustrator)
Paul Kidby discovered Terry Pratchett's Discworld in 1993 and since then has devoted his working life to the place. He is the illustrator of THE PRATCHETT PORTFOLIO, TERRY PRATCHETT'S DISCWORLD COLOURING BOOK, the bestsellers THE LAST HERO and THE ART OF DISCWORLD, as well as the Discworld DIARIES, cards, T-shirts, maps, mugs and, of course, the covers.

GOR001664726
The Art of Discworld by Terry Pratchett
Terry Pratchett
Gollancz S.F.
Used - Very Good
Hardback
Orion Publishing Co
2004-09-30
128
0575075112
9780575075115
N/A
Book picture is for illustrative purposes only, actual binding, cover or edition may vary.
This is a used book - there is no escaping the fact it has been read by someone else and it will show signs of wear and previous use. Overall we expect it to be in very good condition, but if you are not entirely satisfied please get in touch with us.