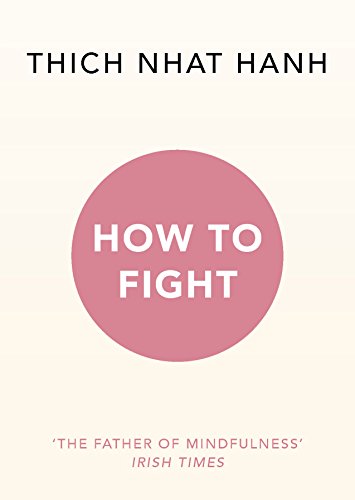 How To Fight
by Thich Nhat Hanh

How To Fight Summary

How To Fight by Thich Nhat Hanh

Learn how to bring love and compassion into an angry situation.

Many of us don't know how to handle strong emotions and our distorted perceptions can make us feel angry or filled with despair. Here, 'the father of mindfulness' teaches us to look deeply at the root of our anger. To see clearly, we must calm down. He shows us how, when insight is born, we will be free.

How To Fight is a pocket-sized guide to life by one of the best known Zen masters in the world, who was nominated for the Nobel Peace Prize.

Customer Reviews - How To Fight

How To Fight Reviews

Born in Hue, Vietnam, Thich Nhat Hanh is a Buddhist Zen Master, poet, scholar and human rights activist. In 1967, he was nominated for the Nobel Peace Prize by Martin Luther King. He founded the Van Hanh Buddhist University in Saigon, the School of Youth and Social Service and the Plum Village Buddhist community and meditation centre in France, where he lived for many years. He is the author of many acclaimed books including Peace is Every Step, Old Path White Clouds and Fear, which have sold millions of copies around the world. He lives at the Tu Hieu Temple in Vietnam where he was first ordained when he was sixteen years old.

GOR010359770
How To Fight by Thich Nhat Hanh
Thich Nhat Hanh
Used - Like New
Paperback
Ebury Publishing
2018-01-04
128
1846045797
9781846045790
N/A
Book picture is for illustrative purposes only, actual binding, cover or edition may vary.
The book has been read, but looks new. The book cover has no visible wear, and the dust jacket is included if applicable. No missing or damaged pages, no tears, possible very minimal creasing, no underlining or highlighting of text, and no writing in the margins.