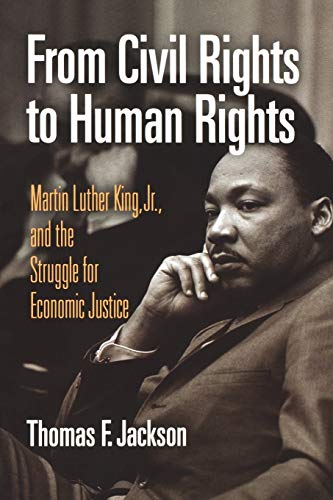 From Civil Rights to Human Rights
by Thomas F. Jackson

From Civil Rights to Human Rights: Martin Luther King, Jr., and the Struggle for Economic Justice by Thomas F. Jackson

Martin Luther King, Jr., is widely celebrated as an American civil rights hero. Yet King's nonviolent opposition to racism, militarism, and economic injustice had deeper roots and more radical implications than is commonly appreciated, Thomas F. Jackson argues in this searching reinterpretation of King's public ministry. Between the 1940s and the 1960s, King was influenced by and in turn reshaped the political cultures of the black freedom movement and democratic left. His vision of unfettered human rights drew on the diverse tenets of the African American social gospel, socialism, left-New Deal liberalism, Gandhian philosophy, and Popular Front internationalism.

King's early leadership reached beyond southern desegregation and voting rights. As the freedom movement of the 1950s and early 1960s confronted poverty and economic reprisals, King championed trade union rights, equal job opportunities, metropolitan integration, and full employment. When the civil rights and antipoverty policies of the Johnson administration failed to deliver on the movement's goals of economic freedom for all, King demanded that the federal government guarantee jobs, income, and local power for poor people. When the Vietnam war stalled domestic liberalism, King called on the nation to abandon imperialism and become a global force for multiracial democracy and economic justice.

Drawing widely on published and unpublished archival sources, Jackson explains the contexts and meanings of King's increasingly open call for "a radical redistribution of political and economic power" in American cities, the nation, and the world. The mid-1960s ghetto uprisings were in fact revolts against unemployment, powerlessness, police violence, and institutionalized racism, King argued. His final dream, a Poor People's March on Washington, aimed to mobilize Americans across racial and class lines to reverse a national cycle of urban conflict, political backlash, and policy retrenchment. King's vision of economic democracy and international human rights remains a powerful inspiration for those committed to ending racism and poverty in our time.

"Jackson makes a persuasive case that King was exposed to various radical critiques at an early stage, that he laced his speeches with moral indictments of inequality and praise for Scandinavian social democracies, and that he sympathized-in private though not in public (at least before the mid-1960s)-with more left-wing critiques of American society."-Chicago Tribune

"An important contribution to modern American history-and a painful reminder of just how far we are from the Promised Land."-Kevin Boyle, author of Arc of Justice: A Saga of Race, Civil Rights and Murder in the Jazz Age

"In this impressive and original account, Jackson challenges us to confront what King and movement activists knew from lifelong experience: that poverty and racism are fundamentally problems of power. . . . Equally compelling is Jackson's portrait of a radicalism grounded in the give and take of movement building and in the vast store of learning it entailed."-Alice O'Connor, author of Poverty Knowledge: Social Science, Social Policy, and the Poor in Twentieth-Century U.S. History

"Never before have King's social and political ideas been so thoroughly documented nor so persuasively explicated. Future generations of King scholars will owe Jackson a debt of gratitude for this monumental book of enduring value."-Clayborne Carson, Director, Martin Luther King, Jr., Research and Education Institute, Stanford University, Senior Editor, The Papers of Martin Luther King, Jr.

"Jackson takes us through the progression of King's public life, including the iconic events-Montgomery, Albany, Birmingham, the Washington march, Selma, Memphis-closely analyzing the ideas, the people, and the conjunction of circumstances particularly influential at the time, as measured by exhaustive analysis of King's speeches, writings, and private conversations (courtesy of the Federal Bureau of Investigation)."-Journal of American History

"[The book] is the first to produce a sustained analysis of the origins and development of King's radical economic analysis and the politics it mandated. . . . Jackson's book rips away the false curtain of moderation and reveals the substance of a rare leader who gave his life in the pursuit of global human rights."-Sociological Inquiry

"From Civil Rights to Human Rights should reinforce King's credentials as one, and perhaps the wisest, of the radical voices of the 1960s."-Dissent

"More than any other historian of the movement, Jackson takes the civil rights leader's ideas seriously. . . .The book was written for academics, but it deserves a large audience. . . . it should help to reshape our collective understanding not only of King and the civil rights movement, but of the movements for peace and racial and economic justice that preceded King and continue today."-Texas Observer

"A more sensitive treatment of King's legacy and its implications for advancing economic democracy does not exist."-The Historian

Thomas F. Jackson is Associate Professor of History at the University of North Carolina, Greensboro.

1. Pilgrimage to Christian Socialism
2. The Least of These
3. Seed Time in the Winter of Reaction
4. The American Gandhi and Direct Action
5. The Dreams of the Masses
6. Jobs and Freedom
7. Malignant Kinship
8. The Secret Heart of America
9. The War on Poverty and the Democratic Socialist Dream
10. Egyptland
11. The World House
12. Power to Poor People

GOR010385476
From Civil Rights to Human Rights: Martin Luther King, Jr., and the Struggle for Economic Justice by Thomas F. Jackson
Thomas F. Jackson
Politics and Culture in Modern America
Used - Very Good
Paperback
University of Pennsylvania Press
2009-08-21
472
0812220897
9780812220896
Winner of Winner of the 2007 Liberty Legacy Foundation Award of the Organization of American Historians.
Book picture is for illustrative purposes only, actual binding, cover or edition may vary.
This is a used book - there is no escaping the fact it has been read by someone else and it will show signs of wear and previous use. Overall we expect it to be in very good condition, but if you are not entirely satisfied please get in touch with us.