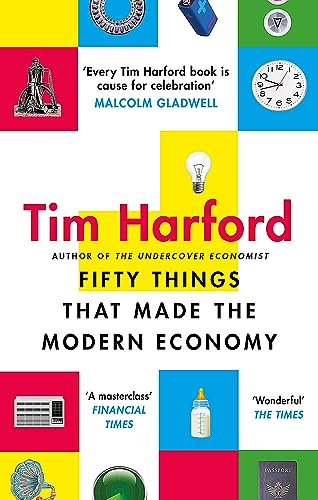 Fifty Things that Made the Modern Economy
by Tim Harford

In Stock
$18.49
inc. GST
Fifty Things that Shaped the Modern Economy paints the epic picture of economic change in an intimate way, by telling the stories of tools and ideas that had far-reaching and unexpected consequences.
Very Good
Only 1 left

Fifty Things that Made the Modern Economy Summary

Fifty Things that Made the Modern Economy by Tim Harford

Based on the series produced for the BBC World Service

Who thought up paper money? How did the contraceptive pill change the face of the legal profession? Why was the horse collar as important for human progress as the steam engine? How did the humble spreadsheet turn the world of finance upside-down?

The world economy defies comprehension. A continuously-changing system of immense complexity, it offers over ten billion distinct products and services, doubles in size every fifteen years, and links almost every one of the planet's seven billion people. It delivers astonishing luxury to hundreds of millions. It also leaves hundreds of millions behind, puts tremendous strains on the ecosystem, and has an alarming habit of stalling. Nobody is in charge of it. Indeed, no individual understands more than a fraction of what's going on.
How can we make sense of this bewildering system on which our lives depend?

From the tally-stick to Bitcoin, the canal lock to the jumbo jet, each invention in Tim Harford's fascinating new book has its own curious, surprising and memorable story, a vignette against a grand backdrop. Step by step, readers will start to understand where we are, how we got here, and where we might be going next.

Hidden connections will be laid bare: how the barcode undermined family corner shops; why the gramophone widened inequality; how barbed wire shaped America. We'll meet the characters who developed some of these inventions, profited from them, or were ruined by them. We'll trace the economic principles that help to explain their transformative effects. And we'll ask what lessons we can learn to make wise use of future inventions, in a world where the pace of innovation will only accelerate.

Fifty Things that Made the Modern Economy Reviews

I love these fact-filled micro-documentaries, steeped in history... A masterclass in socioeconomic storytelling * Financial Times on BBC World Service's Fifty Things that Made the Modern Economy *
They are real masterpieces of brevity and audio storytelling . . . brilliant sideways glances . . . I've been surprised by every episode * Monocle Arts Review on BBC World Service's Fifty Things that Made the Modern Economy *
This is what BBC radio is for. The series is utterly compelling and low-key... Just brilliant ideas, told simply. A wonderful, wonderful programme * The Times on BBC World Service's Fifty Things that Made the Modern Economy *
Harford's script is immaculate and so is his presentation * Times of India on BBC World Service's Fifty Things that Made the Modern Economy *
Short chapters are a delight in this frenetic age . . . Best of all, the book is constantly surprising. It brims with innovations I didn't know about, as well as ones I thought I knew about but did not * The Times *
Packed with fascinating detail . . . Harford has an engagingly wry style and his book is a superb introduction to some of the most vital products of human ingenuity * Sunday Times *
Harford's richness of detail bespeaks skill both as an economic analyst and as a popular commentator. His sections on barbed wire, passports, the contraceptive pill, infant formula, the bar code and even that IKEA staple, the Billy bookcase, are well researched, racily written and genuinely thought-provoking. His five page essay on the pill is infinitely subtler (and more feminist) than the usual stuff about empowerment . . . This is an entertaining book that might distract you from your gramophone for more than an evening and will find a secure place beside Harford's other books on your Billy bookcase * Times Literary Supplement *
Tim Harford, always excellent, turns his eye towards inventions. The plough, the gramophone, the pill, the Billy bookcase. Over and over, Harford shows us, inventions have all sorts of knock-on effects * Evening Standard *
Tim Harford is a master at picking out the perfect little story that explains some huge economic principle ... he's been my go-to guy for learning about the economics and math behind the world at large... perfectly crafted to light up the pleasure centres of my nerd brain -- Roman Mars, 99% Invisible

Tim Harford is a senior columnist for the Financial Times and the presenter of Radio 4's More or Less. He was the winner of the Bastiat Prize for economic journalism in 2006, and More or Less was commended for excellence in journalism by the Royal Statistical Society in 2010, 2011 and 2012. Harford lives in Oxford with his wife and three children, and is a visiting fellow at Nuffield College, Oxford. His other books include The Undercover Economist, The Logic of Life and Adapt.

GOR009318949
Fifty Things that Made the Modern Economy by Tim Harford
Tim Harford
Used - Very Good
Paperback
Little, Brown Book Group
2018-07-31
352
0349142637
9780349142630
N/A
Book picture is for illustrative purposes only, actual binding, cover or edition may vary.
This is a used book - there is no escaping the fact it has been read by someone else and it will show signs of wear and previous use. Overall we expect it to be in very good condition, but if you are not entirely satisfied please get in touch with us.