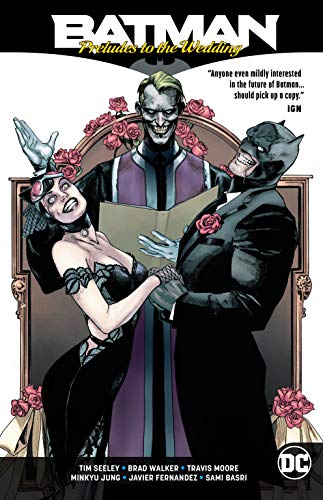 You are cordially invited...

Bruce Wayne and Selina Kyle are about to tie the knot, uniting two of Gotham's greatest vigilantes in the wedding of the century. But the city's deadliest villains are determined to crash the party, and only Batman and Catwoman's closest allies stand in their way!

Robin vs. Ra's al Ghul: It's grandson versus grandfather as the son of the Bat faces the head of the Demon in a fatal family feud!

Batgirl vs. the Riddler: Two of Gotham City's greatest minds clash as the one-time Oracle and the overlord of Zero Year launch a war of wits!

Red Hood vs. Anarky: Agents of chaos collide in a battle between the Dark Knight's rogue Robin and the underworld's most unpredictable mastermind!

Harley Quinn vs. The Joker: Once upon a time, they too might have said, "I do." Now the Clown Prince of Crime and the Mistress of Mayhem are at each other's throats, with all nine of Catwoman's lives hanging in the balance!

Writer Tim Seeley and an all-star wedding band of artists proudly present Batman: Preludes to the Wedding, a killer collection of action-packed matrimonial madness that will help determine the fate of comics' greatest couple!

"Anyone even mildly interested in the future of Batman, Superman or the Justice League should pick up a copy." --IGN

"This prelude is a MUST read for any Belina (Bruce and Selina) fans out there." --Comicosity

Tim Seeley is a comic book artist, writer and all-around maker-upper. His past works include Grayson, Hack/Slash, Witchblade, Revival and G.I. JOE vs. The Transformers. He has written both Green Lanterns and Nightwing for DC Comics, as a part of DC Universe Rebirth.

GOR009776584
Batman Preludes by Tim Seeley
Tim Seeley
Used - Very Good
Paperback
DC Comics
2018-09-11
144
1401286542
9781401286545
N/A
Book picture is for illustrative purposes only, actual binding, cover or edition may vary.
This is a used book - there is no escaping the fact it has been read by someone else and it will show signs of wear and previous use. Overall we expect it to be in very good condition, but if you are not entirely satisfied please get in touch with us.