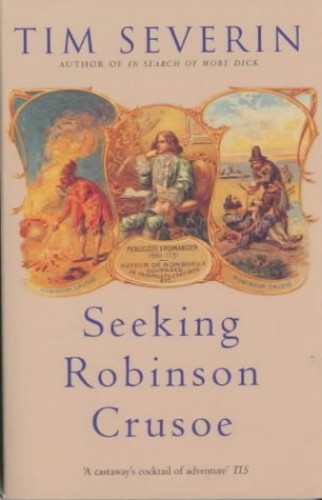 In Stock
$16.49
inc. GST
Combining travel to remote islands and shores with brilliant literary detective work, Seeking Robinson Crusoe is a tale of adventure and discovery and is a fantastic journey into myth and history.
Very Good Good
Only 1 left

Who was the real Robinson Crusoe? In search of the world's most famous castaway Tim Severin travels where men were shipwrecked or abandoned in the days of the pirates and buccaneers... and lived to tell their tales of survival.

A Scottish sailor, Alexander Selkirk, has long been considered as the real life inspiration for Crusoe. So Severin begins his quest on the islands of Juan Fernandez 400 miles off the coast of Chile where Selkirk was marooned for four years.

Daniel Defoe, author of Robinson Crusoe, also knew the extraordinary survival tale of an English buccaneer surgeon, Lionel Wafer, wounded in a pirate raid and abandoned in the jungle of Panama. So Severin goes to meet the Indian tribe, the Kuna, who rescued him. Carrying on his journey he finally takes a 100 year old sailing boat to Salt Tortuga, a small uninhabited island off the coast of Venezuela. There he establishes the truth about a runaway 'white slave', Henry Pitman, marooned by pirates thirty years before Defoe created Crusoe...

Tim Severin, explorer, film-maker and lecturer, has made many expedition from his crossing of the Atlantic in a medieval leather boat in The Brendan Voyage to, most recently, In Search of Moby Dick and Robinson Crusoe. He has won the Thomas Cook Travel Book Award, the Book of the Sea Award, a Christopher Prize, and the literary medal of the Academie de la Marine. In 2005 he turned to fiction with the Viking series of ancient historical novels, of which Viking: Odinn's Child is the first.

GOR003344033
Seeking Robinson Crusoe by Tim Severin
Tim Severin
Used - Very Good
Paperback
Pan Macmillan
2003-06-06
368
0330486772
9780330486774
N/A
Book picture is for illustrative purposes only, actual binding, cover or edition may vary.
This is a used book - there is no escaping the fact it has been read by someone else and it will show signs of wear and previous use. Overall we expect it to be in very good condition, but if you are not entirely satisfied please get in touch with us.