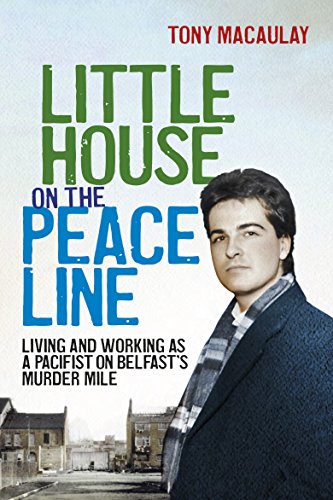 Little House on the Peace Line
by Tony Macaulay

Used Price
$20.99
inc. GST
Free Shipping in Australia
In 1985 Tony Macaulay, a Protestant from the top of the Shankill Road, was appointed assistant director of the 174 Trust. There was one condition - Tony had to move to live on the Catholic side of the peace line.
Very Good Good

Little House on the Peace Line: Living and Working as a Pacifist on Belfast's Murder Mile by Tony Macaulay

`In 1985, I went to live on the other side of the peace line. Everyone said my head was cut. It was the summer of Live Aid and Bob Geldof pledged to save Africa from hunger. My ambitions were more modest. I wanted to stop the violence between Catholics and Protestants in Belfast.' Driven by the conviction that things can change and that he can change them, Tony Macaulay takes up a job running a youth club in the staunchly nationalist New Lodge, an area known as Murder Mile, with youth unemployment at 90 per cent. Challenge enough you might think, but it's also a requirement of the job that Tony, a Protestant from the Shankill Road, and his wife Lesley live in the local community. As the realities of life in a working-class republican community start to hit home, Tony's idealism and faith are pushed to the limit. Inspiring, heart-breaking, and often laugh-out-loud funny, this is the story of how one couple kept the faith in a little house on the peace line.

"This is a lovely, charming story of self-discovery, self-awareness, and throwing up in your girlfriend's mum's biege bidet... Macaulay's voice sings clear and true..." -- Dominic Kearney
"It's a funny and touching memoir of what it was like to be a university student in Coleraine in the 1980s -- and it's set to be another best seller for author Tony Macaulay."

Tony Macaulay grew up in the 1970s at the top of the Shankill Road - an experience that has shaped his life and inspired his writing. Following successful spells as a paperboy and a breadboy, he has gone on to spend more than thirty years working for peace and reconciliation both in Northern Ireland and abroad. Tony is also a writer and broadcaster, contributing regularly to Radio Ulster for more than ten years. His first three books, Paperboy, Breadboy and All Growed Up were critically acclaimed bestsellers. This is his forth book. Follow Tony on Twitter: @tonymacaulay

GOR008614866
Little House on the Peace Line: Living and Working as a Pacifist on Belfast's Murder Mile by Tony Macaulay
Tony Macaulay
Used - Very Good
Paperback
Colourpoint Creative Ltd
2017-06-08
160
0856409928
9780856409929
N/A
Book picture is for illustrative purposes only, actual binding, cover or edition may vary.
This is a used book - there is no escaping the fact it has been read by someone else and it will show signs of wear and previous use. Overall we expect it to be in very good condition, but if you are not entirely satisfied please get in touch with us.