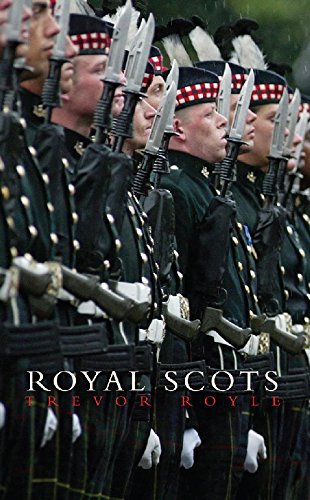 The Royal Scots
by Trevor Royle

The Royal Scots: A Concise History by Trevor Royle

The Royal Scots are Scotland's oldest infantry regiment, with a tradition that stretches back to 1633. This first concise history of the regiment is based largely on the recollections of several generations of Royal Scots - men like Private McBane, who carried his three-year-old son into battle at Malplaquet, and Private Begbie, the youngest soldier to serve in the First World War. These first-hand accounts take the reader through the great wars of the eighteenth century, when Britain was a rising global power, through the setbacks and the triumphs of the Napoleonic Wars and on to the glorious years of the nineteenth century. The two world wars of the twentieth century saw the Royals expand in size, and there are full accounts of its meritorious service on all the main battle fronts. More recently, the regiment has been involved in operations in the Balkans and Iraq. In 2006, in one of the most radical changes in the country's defence policy, the Royal Scots will be amalgamated into the new Royal Regiment of Scotland. Royal Scots is, therefore, a timely celebration of the British Army's most venerable regiment, right of the line and second to none.

"A marvellous biography of an illustrious Scottish regiment . . . a book that will be enjoyed by general readers as well as the military buff" * Sunday Herald *
"Royle studs his compact narrative with the lively recollections of men like Private Donald McBane and Private William Begbie" * Glasgow Herald *
"To compress the story of that service, covering four centuries and nearly all the major wars fought by the British Army during that time, into a single, yet concise volume must have been a real challenge. Trevor Royle, with a clarity of style for which he is justifiably known, has more than met that challenge" -- Colonel RSB Watson OBE (late Royal Scots) * Scottish Legion News *

Trevor Royle has built up an outstanding reputation as a historian of war and empire. His recent books include The Civil War: The War of the Three Kingdoms 1638-1660, Patton: Old Blood and Guts and the ground-breaking Crimea: The Great Crimean War 1854-1856. He lives in Edinburgh.

GOR003010395
The Royal Scots: A Concise History by Trevor Royle
Trevor Royle
Used - Very Good
Hardback
Transworld Publishers Ltd
2006-07-06
240
1845960882
9781845960889
N/A
Book picture is for illustrative purposes only, actual binding, cover or edition may vary.
This is a used book - there is no escaping the fact it has been read by someone else and it will show signs of wear and previous use. Overall we expect it to be in very good condition, but if you are not entirely satisfied please get in touch with us.