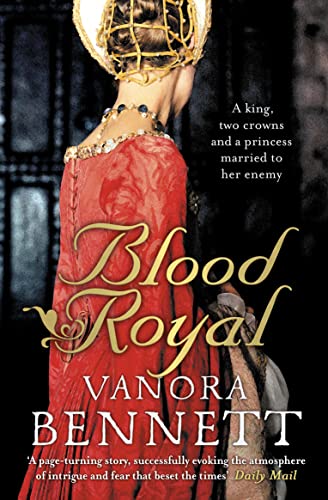 The story of a great queen, a woman of enormous courage who made her own rules, and a true survivor. This is the first in a series of late medieval novels by Vanora Bennett, the author of Portrait of an Unknown Woman.

The story of a great queen, a woman of enormous courage who made her own rules, and a true survivor. This is the first in a series of late medieval novels by Vanora Bennett, the author of Portrait of an Unknown Woman.

1420, and a young princess is offered in marriage to her country's enemy, her nation's conqueror. She is Catherine of Valois, he is Henry V. She is a princess of the French blood royal, he is the son of the usurper of the English throne. Fresh from battle he claims his bride and the right to the throne of France.

Now Catherine must live as queen to a man more comfortable with war than anything else and as the wife of a man determined to destroy her people. Alone and friendless, she finds the only man who can understand what she feels: a young Welshman, Owain Tudor, who is as much adrift among the English as she is. It's a matching of souls but this friendship will turn out to be as dangerous as it is irresistible...

`Bennett writes thoughtful, well-researched historical fiction, finding connections between past and present without too much silliness or fact-bending, and with plenty of romance. Enormous, in every sense of the word' The Times

`A page-turning story, successfully evoking the atmosphere of intrigue and fear that beset the times'
Daily Mail

'A skilful blend of fact and fiction. [Bennett's] characters, story, and fluid writing style sweep you along in a pageant of medieval life. This is quite simply an excellent read!' Historical Novel Society

`If you want a classier-than-average romantic read, one contender is this fine historical debut, a `Girl with a Pearl Earring'-style tale.'
Sunday Times

'An atmospheric, passionate novel set against a backdrop of religious and political upheaval.' Woman and Home

Vanora Bennett is a journalist and writer. She lived and worked in Russia for 7 years, writing for Reuters and the LA Times. She has been a foreign correspondent and feature writer and contributed to publications including The Times, the LA Times, the Guardian, the Observer and the Evening Standard. She lives in London with her husband and two sons. She has written two previous novels: Portrait of an Unknown Woman and Queen of Silks.

GOR001650108
Blood Royal by Vanora Bennett
Vanora Bennett
Used - Very Good
Paperback
HarperCollins Publishers
2010-02-18
608
0007281927
9780007281923
N/A
Book picture is for illustrative purposes only, actual binding, cover or edition may vary.
This is a used book - there is no escaping the fact it has been read by someone else and it will show signs of wear and previous use. Overall we expect it to be in very good condition, but if you are not entirely satisfied please get in touch with us.