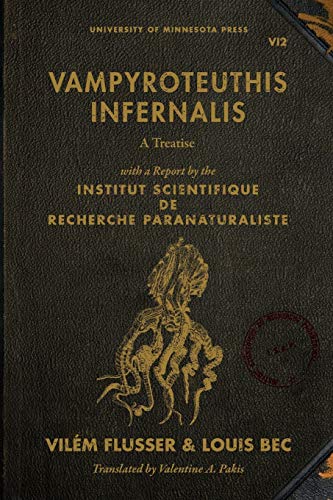 Vampyroteuthis Infernalis: A Treatise, with a Report by the Institut Scientifique de Recherche Paranaturaliste by Vilem Flusser

How far apart are humans from animals-even the vampire squid from hell? Playing the scientist/philosopher/provocateur, Vilem Flusser uses this question as a springboard to dive into a literal and a philosophical ocean. The abyss that separates us from the vampire squid (or vampire octopus, perhaps, since Vampyroteuthis infernalis inhabits its own phylogenetic order somewhere between the two) is incomparably smaller than that which separates us from extraterrestrial life, as imagined in science fiction and sought by astrobiologists, Flusser notes at the outset of the expedition.

Part scientific treatise, part spoof, part philosophical discourse, part fable, Vampyroteuthis Infernalis gives its author ample room to ruminate on human-and nonhuman-life. Considering the human condition along with the vampire squid/octopus condition seems appropriate because we are both products of an absurd coincidence . . . we are poorly programmed beings full of defects, Flusser writes. Among other things, we are both banished from much of life's domain: it into the abyss, we onto the surfaces of the continents. We have both lost our original home, the beach, and we both live in constrained conditions.

Thinking afresh about the life of an other-as different from ourselves as the vampire squid/octopus-complicates the linkages between animality and embodiment. Odd, and strangely compelling, Vampyroteuthis Infernalis offers up a unique posthumanist philosophical understanding of phenomenology and opens the way for a non-philosophy of life.

A classic available in English at last, this collaboration between Vilem Flusser and Louis Bec is a pioneering exploration of uncharted territory in the realm of animal cognition, philosophy and art. At once inquisitive and whimsical, this unclassifiable book brings together some of the best work of two cutting-edge thinkers that were not only geographic but also intellectual neighbors. -Eduardo Kac

Vampryoteuthis Infernalis is a unique work that is at once literary and philosophical, poetic and scientific, and it nicely combines the imaginative fancy of the beast fable with elements of science fiction and horror. Flusser's work is a hybrid creature, a marvelous and monstrous text that mirrors the fantastical creature it describes. The Vampyroteuthis holds a wonderfully strange and unhuman mirror up to the human and in so doing opens the way for a strange and novel non-philosophy of life. -Eugene Thacker, author of After Life

Vilem Flusser (1920-1991) was born in Prague; emigrated to Brazil, where he taught philosophy and wrote a daily newspaper column; and later moved to France. Among his many books that have been translated into English are Does Writing Have a Future?, Into the Universe of Technical Images, and Writings, all from Minnesota.

Louis Bec is an artist who lives and works in Sorgues, France. He is the founder of the Institut Scientifique de Recherche Paranaturaliste.

Valentine A. Pakis is adjunct professor at the University of St. Thomas in St. Paul, Minnesota.

NGR9780816678228
9780816678228
0816678227
Vampyroteuthis Infernalis: A Treatise, with a Report by the Institut Scientifique de Recherche Paranaturaliste by Vilem Flusser
Vilem Flusser
Posthumanities
New
Paperback
University of Minnesota Press
20120906
112
N/A
Book picture is for illustrative purposes only, actual binding, cover or edition may vary.
This is a new book - be the first to read this copy. With untouched pages and a perfect binding, your brand new copy is ready to be opened for the first time
Trustpilot