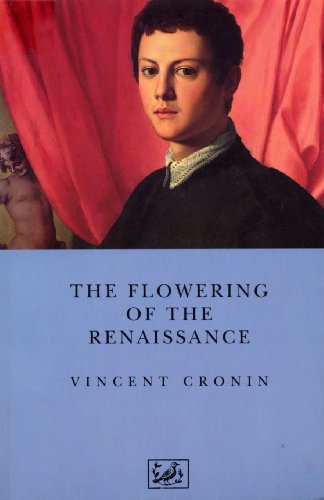 The Flowering of the Renaissance
by Vincent Cronin

Out of Stock
$17.49
inc. GST
Following the collapse of Medici rule in fifteenth-century Florence, the centre of Renaissance activity moved first to Rome and finally to Venice.
Very Good
Only 0 left

The Flowering of the Renaissance Summary

The Flowering of the Renaissance by Vincent Cronin

Following the collapse of Medici rule in fifteenth-century Florence, the centre of Renaissance activity moved first to Rome and finally to Venice. In the Rome of Julius II and Leo X which Michelangelo remodelled and beautified, in the Venice of Titian and Tintoretto and Palladio, the Renaissance reached the height of its splendour, not only in the visual arts but also in the theatre, history, biography, epic poetry and music.

The Flowering of the Renaissance Reviews

"An evocative picture of Rome at the turn of the sixteenth century... the account of Michelangelo is particularly memorable. At the same time Mr Cronin places the Renaissance firmly in its historical, political and religious setting... The book is beautifully written, and in his discussion of such artists as Titian and Giorgione Cronin shows a rare talent for describing and dissecting paintings." * Observer *
"It is Mr Cronin's outstanding achievement to have given this truly chaotic period a form which makes it intelligible - but without distorting its meaningthrough over-simplification." * Daily Telegraph *

Vincent Cronin was educated at Ampleforth College, Harvard University, and Trinity College, Oxford, from which he graduated with honours in 1947. In addition to being a recipient of a W.H. Heinemann Award (1955) and a Rockefeller Foundation Award (1958), Cronin is a fellow of the Royal Society of Literature. His works have been widely translated into European languages. He died in January 2011, aged 86.

GOR001862296
The Flowering of the Renaissance by Vincent Cronin
Vincent Cronin
Used - Very Good
Paperback
Vintage Publishing
1992-09-10
336
0712698841
9780712698849
N/A
Book picture is for illustrative purposes only, actual binding, cover or edition may vary.
This is a used book - there is no escaping the fact it has been read by someone else and it will show signs of wear and previous use. Overall we expect it to be in very good condition, but if you are not entirely satisfied please get in touch with us.