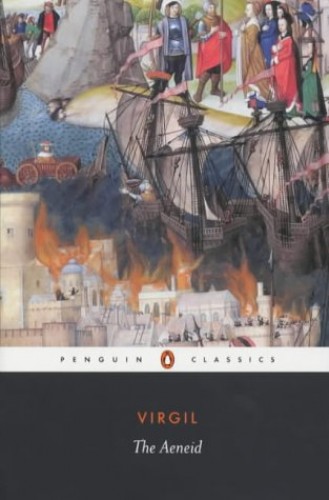 The Aeneid
by Virgil

Out of Stock
$13.99
+10% GST
Inspired by Homer and inspiration for Dante and Milton, the Aeneid is an immortal poem at the heart of Western life and culture. Virgil took Aeneas as his hero and in telling a story of dispossession and defeat, love and war, he portrayed human life in all its nobility and suffering.
Very Good Good
Only 0 left

The Aeneid by Virgil

Inspired by Homer, and the inspiration for Dante and Milton, Virgil's The Aeneid is an immortal epic poem of the ancient world that lies at the heart of Western life and culture, translated from the Latin with an introduction by David West in Penguin Classics.

After a century of civil strife in Rome and Italy, Virgil wrote The Aeneid to honour the emperor Augustus by praising Aeneas - Augustus' legendary ancestor. As a patriotic epic imitating Homer, The Aeneid also set out to provide rome with a literature equal to that of ancient Greece. It tells of Aeneas, survivor of the sack of Troy, and of his seven-year journey - to Carthage, where he tragically fell in love with Queen Dido; then to the underworld, in the company of the Sybil of Cumae; and finally to Italy, where he founded Rome. It is a story of defeat and exile, of love and war, hailed by Tennyson as 'the stateliest measure ever moulded by the lips of man'.

David West's acclaimed prose translation is accompanied by an updated introduction,
Including a new discussion of each of the twelve books of The Aeneid.

Publius Virgilius Maro (70-19 BC) studied rhetoric and philosophy in Rome where he became a court poet. As well as The Aeneid, his Eclogues and Georgics earned him the reputation as the finest Latin poet.

'The most truthful translation ever, conveying as many nuances and whispers as are possible from the original'
The Times

'Sweet prose, clear and clean and dancing like a mountain stream, as here ... West opens the window and the winds bring life into Virgil's body'
Wall Street Journal

"Fitzgerald's is so decisively the best modern Aeneid that it is unthinkable that anyone will want to use any other version for a long time to come."--New York Review of Books

"From the beginning to the end of this English poem...the reader will find the same sure control of English rhythms, the same deft phrasing, and an energy which urges the eye onward."--The New Republic

"A rendering that is both marvelously readable and scrupulously faithful.... Fitzgerald has managed, by a sensitive use of faintly archaic vocabulary and a keen ear for sound and rhythm, to suggest the solemnity and the movement of Virgil's poetry as no previous translator has done (including Dryden).... This is a sustained achievement of beauty and power."--Boston Globe

Virgil (70-19BC) studied rhetoric and philosophy in Rome where he became a court poet. As well as The Aeneid, his Eclogues earned him the reputation as the finest Latin poet.
Before his retirement, David West taught Classics at the University of Newcastle.

GOR001426048
The Aeneid by Virgil
Virgil
Used - Very Good
Paperback
Penguin Books Ltd
2003-03-27
368
0140449329
9780140449327
N/A
Book picture is for illustrative purposes only, actual binding, cover or edition may vary.
This is a used book - there is no escaping the fact it has been read by someone else and it will show signs of wear and previous use. Overall we expect it to be in very good condition, but if you are not entirely satisfied please get in touch with us.