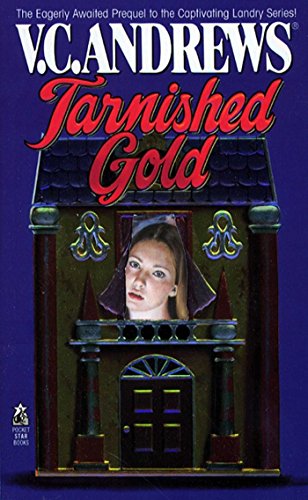 Out of Stock
$22.49
inc. GST
Preparing for her high-school graduation, young bayou teen Gabriel is raped and impregnated by rich cannery owner Octavious Tate and is subsequently forced to surrender her baby boy to her attacker's wife.
Very Good
Only 0 left

"Tarnished Gold" is the captivating prequel to the bestselling V. C. Andrews(c) Landry series that began with "Ruby" and continued with "Pearl in the Mist, All That Glitters, and Hidden Jewel." This thrilling new novel takes us back to the Louisiana bayou in the time before "Ruby." In a world of wondrous natural beauty, a world of tantalizing dreams and inescapable sorrow, we meet Gabriel Landry, daughter of Catherine and Jack.

Growing up in her beloved swamp, Gabriel is supremely happy, despite the ever-widening rift between her Mama and her conniving, whiskey-drinking Daddy. Her classmates tease her, calling her "La Femme Au Naturel," the Nature Girl, because she seems more interested in poling her pirogue through the canals than she is in romance. But Gabriel nurtures her own secret dreams. Then, days before her high school graduation, rich cannery owner Octavious Tate surprises her in a secluded pond and shatters her innocence.

Pregnant and desolate, wishing to spare her dear Mama the scandal, Gabriel agrees to a shocking plan that will allow Octavious's frigid wife Gladys to claim the baby as her own and will net Gabriel's furious Daddy a huge payoff. Hiding in a tiny abandoned playroom in the Tate mansion, Gabriel is miserable. Her only visitor is Mama, whose mission as a Traiteur, a Cajun healer, gives her an excuse to treat Gladys Tate's "pregnancy." But nothing is more wrenching than the moment Gladys takes baby Paul away forever.

Returning home to the swamp, Gabriel drifts in a world of twilight gloom, brightened only by chance glimpses of her son. But as Jack Landry's reputation as a swamp guide grows, a hunting party brings handsome, gentle Creole millionaire Pierre Dumas to the bayou. Falling desperately in love, Gabriel will not heed the voice warning that their joy may bring her more grief than she can bear....

GOR007174485
Tarnished Gold by Virginia Andrews
Virginia Andrews
Used - Very Good
Paperback
Simon & Schuster
2003-07-02
314
0671873210
9780671873219
N/A
Book picture is for illustrative purposes only, actual binding, cover or edition may vary.
This is a used book - there is no escaping the fact it has been read by someone else and it will show signs of wear and previous use. Overall we expect it to be in very good condition, but if you are not entirely satisfied please get in touch with us.