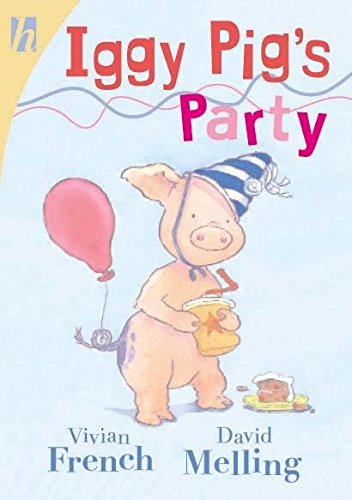 Out of Stock
$52.99
inc. GST
It's Iggy Pig's birthday and he's celebrating with a party! Who do you think he will invite?
Very Good
Only 0 left

Iggy Pig is having a party for his birthday. He invites Tabby Cat and Dusty Dog. But his big mistake is in inviting the big grey wolf, who plans to eat more than just cabbage leaves and potato peelings. This is an easy-to-read first story with short text and lots of colour pictures.

This is the way to learn to read -- more please * School Librarian *
An excellent example of a simple tale, told in simple language which never loses sight of the fact that a good strong, rhythmic narrative is the best way of gaining the attention of young listeners and readers * Carousel *
'These delightful tales about a young pig and his farmyard friends contain ample repetition within robustly patterned texts which, along with matching illustrations, prove very accessible to novice readers. Additionally, the allusion to what big grey animals tend to do to little pigs makes for compulsive stories which, in Margaret Meek's words, 'mean more than they say'. This is the way to learn to read - more please. * The School Librarian, July 1999 *
Fun, easy-to-read stories, ideal for building reading confidence * Shelf Life Summer 2002 *

Vivian French's first three books were published in 1990, and since then she has written more than seventy.
David Melling was born in Oxford. His father was a sculptor and David inherited his artistic leanings. He lived in Italy for some time. He is now married with a baby daughter. David recently won a Right Start Silver Award for Count Down To Bedtime.

GOR005259343
Iggy Pig's Party by Vivian French
Vivian French
Used - Very Good
Paperback
Hachette Children's Group
2002-05-16
48
034085247X
9780340852477
N/A
Book picture is for illustrative purposes only, actual binding, cover or edition may vary.
This is a used book - there is no escaping the fact it has been read by someone else and it will show signs of wear and previous use. Overall we expect it to be in very good condition, but if you are not entirely satisfied please get in touch with us.