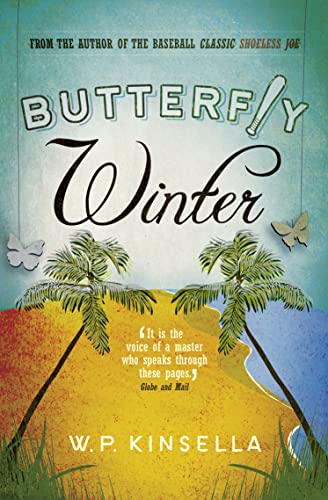 Butterfly Winter, W.P. Kinsella's first novel in 15 years, is the story of Julio and Esteban Pimental, twins born in the Caribbean country of Courteguay, an enchanted but impoverished enclave on the border between Haiti and the Dominican Republic where time moves at its own pace and reality is open to question.

The brothers are born to play baseball, they even played catch in the womb, and at the age of ten they leave home for the American Major Leagues. Julio proves to be a winning pitcher who, much to the frustration of any team that signs him, will only throw to his catcher brother, who is a very weak hitter.

As they pursue their baseball dreams, they are monitored by the Wizard, a mysterious figure who controls events behind the scenes. In his last years, the Wizard tells the story of the twins, their family and their lovers to an American journalist.

Butterfly Winter is a magical fable from one of Canada's best-loved novelists.

"It is the voice of a master who speaks through these pages." - Globe & Mail

"Butterfly Winter is magical, with language that sings off the page." - NOW

"The author's mastery of the written word has only grown with the passing of time." - Columbia Daily Tribune

GOR005618462
Butterfly Winter by W. P. Kinsella
W. P. Kinsella
Used - Very Good
Paperback
HarperCollins Publishers
2013-07-04
320
0007497598
9780007497591
N/A
Book picture is for illustrative purposes only, actual binding, cover or edition may vary.
This is a used book - there is no escaping the fact it has been read by someone else and it will show signs of wear and previous use. Overall we expect it to be in very good condition, but if you are not entirely satisfied please get in touch with us.