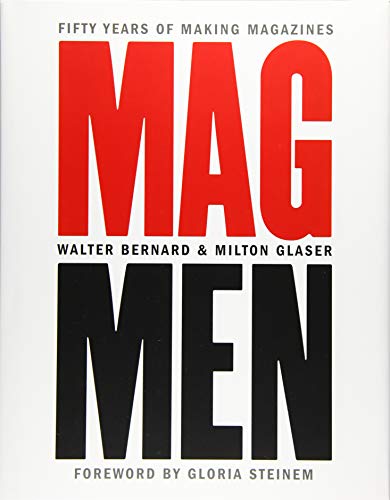 Used Price
$67.99
inc. GST
Free Shipping in Australia
For more than fifty years, Walter Bernard and Milton Glaser have revolutionized the look of magazine journalism. In Mag Men, Bernard and Glaser recount their storied careers, offering insiders' perspective on some of the most iconic design work of the twentieth century.
Like New

For more than fifty years, Walter Bernard and Milton Glaser have revolutionized the look of magazine journalism. In Mag Men, Bernard and Glaser recount their storied careers, offering insiders' perspective on some of the most iconic design work of the twentieth century. The authors look back on and analyze some of their most important and compelling projects, from the creation of New York magazine to redesigns of such publications as Time, Fortune, Paris Match, and The Nation, explaining how their designs complemented a story and shaped the visual identity of a magazine.

Richly illustrated with the covers and interiors that defined their careers, Mag Men is bursting with vivid examples of Bernard and Glaser's work, designed to encapsulate their distinctive approach to visual storytelling and capture the major events and trends of the past half century. Highlighting the importance of collaboration in magazine journalism, Bernard and Glaser detail their relationships with a variety of writers, editors, and artists, including Nora Ephron, Tom Wolfe, Gail Sheehy, David Levine, Seymour Chwast, Katherine Graham, Clay Felker, and Katrina vanden Heuvel. The book features a foreword by Gloria Steinem, who reflects on her work in magazines and her collaborations with Bernard and Glaser. At a time when uncertainty continues to cloud the future of print journalism, Mag Men offers not only a personal history from two of its most innovative figures but also a reminder and celebration of the visual impact and sense of style that only magazines can offer.

Bernard and Glaser revolutionized the look of magazines, and in the process they reinvigorated the art of visual storytelling. This beautiful book, filled with vivid examples of their genius, is an honest and fascinating look at the world of magazine making. -- Walter Isaacson, former editor of Time and author of Leonardo da Vinci and Steve Jobs
Legendary and pioneering magazine designers Bernard and Glaser illuminate their work in this entertaining illustrated look at New York magazine and others they worked on ... [an] essential history could almost be seen as a requiem. * Publishers Weekly *
In 2013, Bernard and Glaser received the American Society of Magazine Editors Creative Excellence Award. Open up Mag Men to any page and you'll see why. * Air Mail *
We dare you to put it down. * Folio *

Walter Bernard has been the designer and art director of many of the best-known magazines and newspapers in the United States, including Time, Fortune, and The Atlantic. He coproduced the documentary Portraits of a Lady (2008). In 2013, he received the Henry R. Luce Lifetime Achievement award for his work at Time Inc.

Milton Glaser is one of the most important graphic designers of the twentieth century, responsible for many iconic designs, including the "I Love New York" logo. In 2009, he was awarded the National Medal of Arts, the first graphic designer to receive the award. He has written several books, including Drawing Is Thinking (2008) and In Search of the Miraculous: Or, One Thing Leads to Another (2012).

Foreword
Introduction
1. "Shall We Start a New Magazine?"
2. New Opportunities on Bigger Stages
3. Together Again
List of Magazines
Acknowledgments
Index

GOR010754003
Mag Men: Fifty Years of Making Magazines by Walter Bernard
Walter Bernard
Used - Like New
Hardback
Columbia University Press
2019-12-06
288
0231191804
9780231191807
N/A
Book picture is for illustrative purposes only, actual binding, cover or edition may vary.
The book has been read, but looks new. The book cover has no visible wear, and the dust jacket is included if applicable. No missing or damaged pages, no tears, possible very minimal creasing, no underlining or highlighting of text, and no writing in the margins.