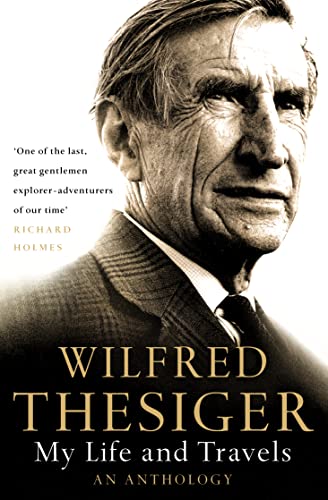 My Life and Travels by Wilfred Thesiger

An anthology of writings and photographs celebrating the outstanding contribution of one of the country's most distinguished and enduring travel writers, and the century's greatest living explorer.

My Life and Travels: An Anthology by Wilfred Thesiger

An anthology of writings and photographs celebrating the outstanding contribution of one of the country's most distinguished and enduring travel writers, and the century's greatest living explorer.

At the age of twenty-three, three years after attending the coronation of Haile Selassie, Thesiger made his first expedition into the country of the murderous Danakil tribe. Since then he has traversed the Empty Quarter twice, spending five years among the Bedu, followed by several years living as no Westerner had in the strange world of the Marshmen of Iraq.

Later he made many mountain journeys in the awesome ranges of the Karakorams, the Hindu Kush, Ladakh and Chitral. After these varied and often dangerous adventures among fast-disappearing cultures, Thesiger settled down to spend over twenty years living mostly among the pastoral Samburu in Northern Kenya, until 1994 when he finally returned to England permanently.

These experiences have, over the years, provided rich material for writings which express a romantic but austere vision, and for exquisite photographs which capture the spirit of a bygone era. This book contains extracts from the eight books Thesiger published to great acclaim between 1959 and 1998, most notably `Arabian Sands', `Marsh Arabs' and `The Life of My Choice'.

`One of the very few people who in our time could be put on the pedestal of the great explorers of the 18th and 19th centuries.' David Attenborough

`He belongs to an endangered species; he is one of the last, great gentlemen explorer-adventurers of our time.' Richard Holmes

`He dwells in a Homeric age of exploration and travel writing, an age before sponsorship and television tie-ins. He stands as a monolith against trash consumerist and trash celebrity culture.' Sara Wheeler

Wilfred Thesiger was born in 1910 in Ethiopia. From 1930 he travelled through remote areas of Africa, the Middle East and Asia. His journeys and his books have won him numerous prestigious awards over the years. In 1968 he was made a CBE; he was honoured with a KBE in 1995.

GOR001218638
9780006552123
0006552129
My Life and Travels: An Anthology by Wilfred Thesiger
Wilfred Thesiger
Used - Very Good
Paperback
HarperCollins Publishers
2003-10-06
320
N/A
Book picture is for illustrative purposes only, actual binding, cover or edition may vary.
This is a used book - there is no escaping the fact it has been read by someone else and it will show signs of wear and previous use. Overall we expect it to be in very good condition, but if you are not entirely satisfied please get in touch with us
Trustpilot