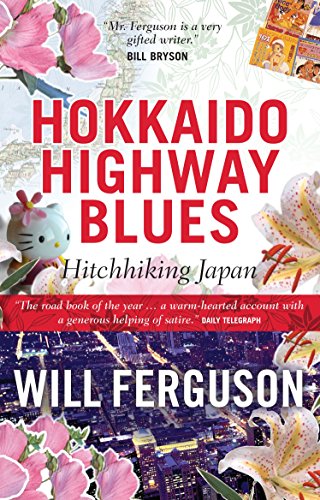 Hokkaido Highway Blues
by Will Ferguson

Abridged edition It had never been done before. Not in 4000 years of Japanese recorded history had anyone followed the Cherry Blossom Front from one end of the country to the other. Nor had anyone hitchhiked the length of Japan. But, heady on sakura and sake, Will Ferguson bet he could do both. The resulting travelogue is one of the funniest and most illuminating books ever written about Japan. And, as Ferguson learns, it illustrates that to travel is better than to arrive.

A fantastically offbeat odyssey brimming with irony, poetry and insight * * Scotsman * *
Beneath that thick skin lies a poetic soul: he may drink too much, and end up sweaty and alone in sad 'Love Hotels', but he can write about Shintoism, history, nature and architecture with real sensitivity. Hitching allows him to give us a fresh and funny perspective on a nation that can be both mysterious and "beyond surreal" * * Sunday Times * *
I enjoyed Hokkaido Highway Blues immensely - Mr Ferguson is a very gifted writer -- Bill Bryson
Loaded with insights and highly original observations, this is overall an outstanding piece of travel writing. That so much of it is side-splittingly funny helps * * Insight Japan * *
A mild stroke of genius . . . it's difficult not to warm to his free-wheeling style. It always sounds stupid to describe something as "laugh-out-loud-funny", but parts of his concisely-sectioned travelogue are savagely hilarious * * Sunday Herald * *

Will Ferguson was born and raised in the former fur-trapping settlement of Fort Vermilion in the backwoods of northern Canada. Fortunately, he managed to escape, and he has since travelled throughout Latin America and East Asia. Indeed, he prides himself on having gotten utterly and hopelessly lost in more than a dozen exotic locales, including Ecuador, Peru, Indonesia, Malaysia, China, Korea, and Japan. 'How I ever became a travel writer is beyond me,' he confesses. 'I have absolutely no sense of direction.' Ferguson has a BFA in screenwriting from York University, Toronto. His first three books were plucked from the slush pile: he is the author of the satirical bestseller Why I Hate Canadians, which was all but banned from export (though it can be ordered online at chapters.ca, he advises), and his other works include a nuts-and-bolts traveller's bible, The Hitchhiker's Guide to Japan, as well as a humorous expose about his experience in a misguided drunken government youth program, entitled I Was a Teenage Katima-victim! He has also written an insightful and highly scientific political analysis: Bastards & Boneheads (it was a study of our leaders).

GOR001523499
Hokkaido Highway Blues: Hitchhiking Japan by Will Ferguson
Will Ferguson
Used - Very Good
Paperback
Canongate Books Ltd
2003-06-05
352
1841952885
9781841952888
N/A
Book picture is for illustrative purposes only, actual binding, cover or edition may vary.
The book has been read but remains in clean condition. All pages are intact and the cover is intact. Some minor wear to the spine.