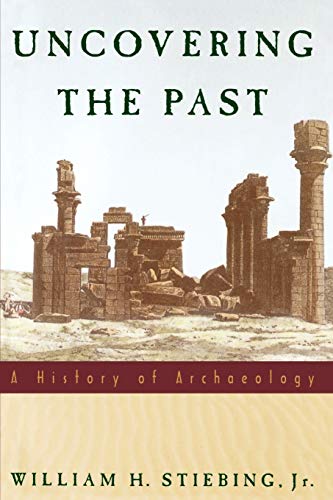 Uncovering the Past
by William H. Stiebing, Jr. (Professor of History, University of New Orleans)

In Stock
$13.99
+10% GST
This is the first study to focus on the development of archaeology as a discipline, tracing the milestones in the evolution of systematic excavation. It covers the entire history of archaeology from the `heroic age' (1450-1925), to the advanced stages of archaeology beginning in 1960 and continuing to the present day.
Very Good Well Read
Only 3 left

Uncovering the Past Summary

Uncovering the Past: A History of Archaeology by William H. Stiebing, Jr. (Professor of History, University of New Orleans)

When one hears the words "archaeology" or "archaeologist," often what comes to mind is an image of a romantic figure: Indiana Jones exploring exotic places in search of treasure and adventure. Indeed, novels, movies, and many popular accounts of archaeological discoveries have made this concept widespread. Tales of abandoned cities, ruined temples, primeval monuments, or mysterious ancient tombs tend to kindle the urge for adventure, exploration, or treasure hunting that seems to lie beneath the surface of even the most timid and conventional individuals. Today, however, archaeologists seek knowledge rather than objects that are intrinsically valuable. Their ultimate goal is to sweep aside the mists in which time has enveloped the past, helping us to understand vanished peoples and cultures. In Uncovering the Past, William H. Stiebing, Jr. offers an absorbing nontechnical history of archaeology, tracing the study of ancient material culture from its beginnings in the Renaissance through its development into the sophisticated modern discipline we know today. The first study to focus on archaeology as a discipline, Stiebing has organized this concise history into the four stages of archaeological development. The first two stages (1450-1860 and 1860-1925), known as the "heroic age," focus on the exploits of colorful, dynamic excavators who have made their mark on history and our imaginations. We read accounts of Giovanni Belzoni and the removal of the seven-ton colossus of Ramesses II, which was dragged by wooden platform and transported by boat from Egypt to London; we witness the cleryman John Peters's skirmish with Arab tribesmen, who surrounded his excavation site and finally pillaged and burned his camp; and Heinrich Schliemann's quest to prove the authenticity of Homer's Iliad by searching for ancient Troy along the Turkish coast. And we watch as archaeology comes of age as an academic discipline, employing stratigraphical excavation techniques, typographical sequence dating, and stratigraphically based pottery chronology-laying the foundation for universal archaeological activity. The third phase (1925-1960) marked the era of "Modern Archaeology," a time when, using the now generally accepted stratigraphical method of excavation, scholars were able to synthesize data to define individual cultures and trace their development through time. This period saw a greater use of scientific instruments and procedures to locate, date, and interpret remains, such as aerial photography, metal detectors, and most importantly, carbon-14 dating and tree-ring chronology. Lastly, Stiebing discusses the fourth phase of development (1960-present) which introduced a greater desire and need for a more complete understanding of ancient cultures, including their ecology, and attempts to explain why certain cultural phenomena occurred. He goes on to examine the greater emphasis on a cultural evolutionary approach, coupled with technological advances in robotics and computers over the last decade and a half and their commonplace role in modern archaeology. With over eighty photographs, illustrations, and maps, this vivid history is an outstanding introduction to the intruguing field of archaeology, chronicling the development of this former pastime of dilettantes into a rigorous science.

Uncovering the Past Reviews

non-technical ... logically organised ... The book offers a lasting impression of how young, dynamic and productive the field is. * Saudi Aramco World, Vol.52, No.2, March/April 2001 *

William H. Stiebing, Jr. is Professor of History at the University of New Orleans and author of the critically acclaimed Out of the Desert?.