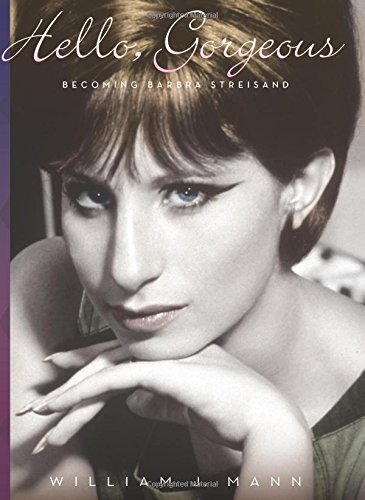 In Stock
$25.99
inc. GST
The acclaimed and bestselling biographer of Katherine Hepburn and Elizabeth Taylor charts Barbra Streisand's climb to fame during her New York years and tells the electrifying story of how she transformed herself into the greatest superstar of her era.
Very Good
Only 2 left

The best-selling biographer of Katharine Hepburn and Elizabeth Taylor tells the electrifying story of how Barbra Streisand transformed herself into the greatest star of her era, etching "an indelible portrait of the artist as a young woman" (Publishers Weekly).

In 1960, she was a seventeen-year-old Brooklyn kid with plenty of talent but no connections and certainly no money; her mother brought her soup to make sure she stayed fed as she took acting classes and scraped out a living. Just four years later, Barbra Streisand was the top-selling female recording artist in America and the star of one of Broadway's biggest hits. Now the acclaimed Hollywood biographer William Mann chronicles that dizzying ascent, telling the riveting behind-the-scenes story of how Streisand and her team transformed her from an unknown dreamer into a worldwide superstar.

Drawing on the private papers of Jerome Robbins and Bob Fosse, and interviewing scores of the friends and lovers who knew Barbara before she became Barbra, Mann recreates the vanished world of 1960s New York City and uncovers the truth behind the myths of her formative years. He shows us how Funny Girl was slowly altered, by Fosse and Robbins among others, from a Fanny Brice bio into a star-making vehicle for Streisand; takes us into the clubs and onto the set for her early nightclub and television appearances, including her torch-handing turn with Judy Garland; and introduces the canny marketing team whose strategies made her stardom seem inevitable. The Streisand who emerges is a revelation: a young woman who, for all her tough-skinned ambition, was surprisingly vulnerable in love.

Everyone who has felt outside the gate, as she once did, remembers a time when the newness and difference of Barbra Streisand changed everything and rewrote all the rules. In Hello, Gorgeous, Mann incisively illuminates the woman before she became the icon and pays tribute to one of the world's most beloved performers.

"Trying to figure out the Barbra Streisand mystique is no easy task, but Mann expertly captures the launch of her remarkable career in the early 1960s when a unique 'star was born.' Mann's meticulous research and insightful analysis go deeper than any previous biography..."
--USA Today

"Mann, who has written bios of Katherine Hepburn and Elizabeth Taylor, has found another great subject here, and he offers up many new tidbits about Streisand's early life: details of her first affair, with a bisexual actor; her rejecting moth's reaction to seeing her onstage for the first time; and some ruminations about those 3-inch nails." -- People Magazine

"[An] excellent new work...One can only put down HELLO, GORGEOUS with renewed appreciation for Barbra's single-mindedness, and with some glimpse of her inner struggle."
--Liz Smith, syndicated columnist

"Mann depicts not just her ferocious ambition and equally fierce insecurities, but also the people and strategies that enabled her rise. With many of those acolytes and assistants as sources, Mann provides an intimate, gossipy and sympathetic accounts of early Streisand." -- The Forward

"In his masterful book, Mann captures one of the most fully realized pictures of the multi-hyphenate superstar to date. . . . Many books have been written about Streisand but few, if any, put readers as close to the subject as Mann does." -- The Miami Herald

"Streisand fans will come away feeling they've had a ringside seat at her early career, and they will leave the show applauding."
--Booklist

"A compelling, detailed look at the rise of the multitalented Streisand from 17-year-old unknown to chart-topping singer and Broadway star. Highly recommended for fans of Streisand, biographies, and theater."
--Library Journal

WILLIAM J. MANN is the author of Kate: The Woman Who Was Hepburn, which was named a New York Times Notable Book, as well as several other acclaimed works of fiction and nonfiction. He divides his time between Provincetown, Massachusetts, and New York City.

GOR006304983
Hello, Gorgeous: Becoming Barbra Streisand by William J Mann
William J Mann
Used - Very Good
Hardback
Cengage Learning, Inc
2012-10-09
566
0547368925
9780547368924
N/A
Book picture is for illustrative purposes only, actual binding, cover or edition may vary.
This is a used book - there is no escaping the fact it has been read by someone else and it will show signs of wear and previous use. Overall we expect it to be in very good condition, but if you are not entirely satisfied please get in touch with us.