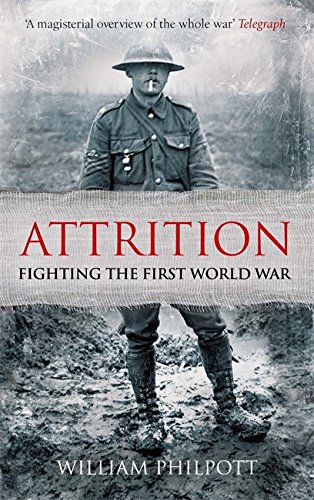 Used Price
$13.69
inc. GST
Free Shipping in Australia
The magnum opus of the First World War, from the outstanding historian at the King's College Department of War Studies.
Very Good

The First World War was too big to be grasped by its participants. In the retelling of their war in the competing memories of leaders and commanders, and the anguished fiction of its combatants, any sense of order and purpose, effort and achievement, was missing.

Drawing on the experience of front line soldiers, munitions workers, politicians and those managing the vast economy of industrialised warfare, Attrition explains for the first time why and how this new type of conflict born out of industrial society was fought as it was. It was the first mass war in which the resources of the fully-mobilised societies strained every sinew in a conflict over ideals - and the humblest and highest were all caught up in the national enterprise.

In a stunning narrative, this brilliant and necessary reassessment of the whole war cuts behind the myth-making to reveal the determination, organization and ambition on all sides.

A refreshingly balanced view . . . the great strength of Philpott's book is its magisterial overview of the whole war . . . a fine contribution to our growing understanding of the conflict -- Peter Parker * Daily Telegraph *
A highly readable account . . . a great book for those who want to look behind the propaganda * Sunday Herald *

Philpott's achievement is to present a view of The Great War as an attritional conflict in a very readable fashion. 'Attrition' is an accessible work for the general reader rather than a denesley argued mongraph...

Attrition stands on its own merits, as an important contribution to an active and lively scholarly debate

* Times Literary Supplement *
A first-class overview of the whole war, and a useful addition to anyone's library * Military History *

Dr William Philpott is Professor of the History of Warfare in the Department of War Studies, King's College London. He is a specialist in the First World War, in particular British strategy and the history of the French army.

GOR007027505
Attrition: Fighting the First World War by William Philpott
William Philpott
Used - Very Good
Paperback
Little, Brown Book Group
2015-08-13
416
0349000077
9780349000077
N/A
Book picture is for illustrative purposes only, actual binding, cover or edition may vary.
This is a used book - there is no escaping the fact it has been read by someone else and it will show signs of wear and previous use. Overall we expect it to be in very good condition, but if you are not entirely satisfied please get in touch with us.