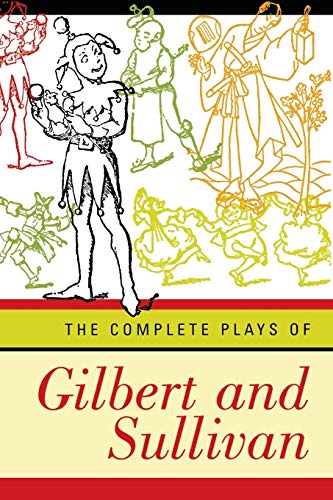 The Complete Plays of Gilbert and Sullivan
by William Schwenck Gilbert

Out of Stock
$29.49
inc. GST
From Trial by Jury to The Pirates of Penzance: the complete librettos of all fourteen Gilbert and Sullivan operas.
Very Good
Only 0 left

The Complete Plays of Gilbert and Sullivan Summary

The Complete Plays of Gilbert and Sullivan by William Schwenck Gilbert

Gilbert's verses for Sullivan's music are the most fastidiously turned and inventively rhymed in all lyric comedy. As the Savoy Operas enter their second century on a swell of renewed popularity, Gilbert's reputation as the supreme wordsmith of light opera remains secure.

Complete and authentic, these are the librettos on which modern performances and recordings are based. Scattered among the songs are over seventy of the amusing, quirky pictures Gilbert drew to illustrate them. A chronology prepared for this edition sketches the authors' lives and careers. This is a book that no lover of Gilbert and Sullivan, musical comedy, or indeed the English theater will want to be without.

Sir William Schwenck Gilbert, KBE, was an English dramatist, librettist, poet and illustrator, best known for his fourteen comic operas produced in collaboration with the composer Sir Arthur Seymour Sullivan, of which the most famous include H.M.S. Pinafore, The Pirates of Penzance, and The Mikado. Sir Arthur Seymour Sullivan, MVO, was an English composer, of Irish and Italian descent, best known for his operatic collaborations with librettist Sir William Schwenck Gilbert, including such continually popular works as H.M.S. Pinafore, The Pirates of Penzance, and The Mikado. Sullivan's artistic output included 23 operas, 13 major orchestral works, eight choral works and oratorios, two ballets, incidental music to several plays, and numerous hymns and other church pieces, songs, parlour ballads, part songs, carols, and piano and chamber pieces.

GOR003288980
The Complete Plays of Gilbert and Sullivan by William Schwenck Gilbert
William Schwenck Gilbert
Used - Very Good
Paperback
WW Norton & Co
1997-10-15
624
0393316882
9780393316889
N/A
Book picture is for illustrative purposes only, actual binding, cover or edition may vary.
This is a used book - there is no escaping the fact it has been read by someone else and it will show signs of wear and previous use. Overall we expect it to be in very good condition, but if you are not entirely satisfied please get in touch with us.