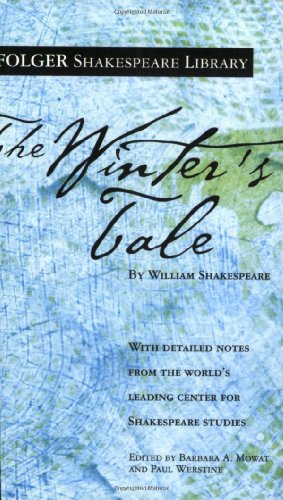 The Winter's Tale
by William Shakespeare

The Winter's Tale by William Shakespeare

The Winter's Tale, one of Shakespeare's very late plays, is filled with improbabilities. Before the conclusion, one character comments that what we are about to see, "Were it but told you, should be hooted at / Like an old tale."

It includes murderous passions, man-eating bears, princes and princesses in disguise, death by drowning and by grief, oracles, betrayal, and unexpected joy. Yet the play, which draws much of its power from Greek myth, is grounded in the everyday.

A "winter's tale" is one told or read on a long winter's night. Paradoxically, this winter's tale is ideally seen rather than read-though the imagination can transform words into vivid action. Its shift from tragedy to comedy, disguises, and startling exits and transformations seem addressed to theater audiences.

The authoritative edition of The Winter's Tale from The Folger Shakespeare Library, the trusted and widely used Shakespeare series for students and general readers, includes:

The Folger Shakespeare Library in Washington, DC, is home to the world's largest collection of Shakespeare's printed works, and a magnet for Shakespeare scholars from around the globe. In addition to exhibitions open to the public throughout the year, the Folger offers a full calendar of performances and programs. For more information, visit Folger.edu.

William Shakespeare was born in April 1564 in the town of Stratford-upon-Avon, on England's Avon River. When he was eighteen, he married Anne Hathaway. The couple had three children-an older daughter Susanna and twins, Judith and Hamnet. Hamnet, Shakespeare's only son, died in childhood. The bulk of Shakespeare's working life was spent in the theater world of London, where he established himself professionally by the early 1590s. He enjoyed success not only as a playwright and poet, but also as an actor and shareholder in an acting company. Although some think that sometime between 1610 and 1613 Shakespeare retired from the theater and returned home to Stratford, where he died in 1616, others believe that he may have continued to work in London until close to his death.

GOR001965112
The Winter's Tale by William Shakespeare
William Shakespeare
Folger Shakespeare Library
Used - Very Good
Paperback
Simon & Schuster
2005-01-01
352
0743484894
9780743484893
N/A
Book picture is for illustrative purposes only, actual binding, cover or edition may vary.
This is a used book - there is no escaping the fact it has been read by someone else and it will show signs of wear and previous use. Overall we expect it to be in very good condition, but if you are not entirely satisfied please get in touch with us.