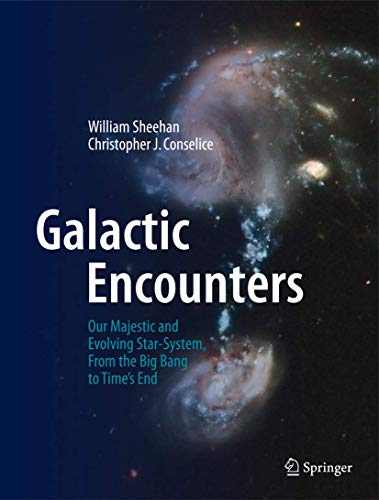 This book offers a rich introduction to the wonders of the Galaxy, in an up-to-date, scientifically informed style that appeals to both researchers and the general reader. Includes maps produced especially for this book by the master illustrator Julian Baum.

Galactic Encounters: Our Majestic and Evolving Star-System, From the Big Bang to Time's End by William Sheehan

Written by William Sheehan, a noted historian of astronomy, and Christopher J. Conselice, a professional astronomer specializing in galaxies in the early universe, this book tells the story of how astronomers have pieced together what is known about the vast and complicated systems of stars and dust known as galaxies.

The first galaxies appeared as violently disturbed exotic objects when the Universe was only a few 100 million years old. From that tortured beginning, they have evolved though processes of accretion, merging and star formation into the majestic spirals and massive ellipticals that dominate our local part of the Universe. This of course includes the Milky Way, to which the Sun and Solar System belong; it is our galactic home, and the only galaxy we will ever know from the inside. Sheehan and Conselice show how astronomers' understanding has grown from the early catalogs of Charles Messier and William Herschel; developed through the pioneering efforts of astronomers like E.E. Barnard, V.M. Slipher, Henrietta Leavitt, Edwin Hubble and W.W. Morgan; and finally is reaching fruition in cutting-edge research with state-of-the-art instruments such as the Hubble Space Telescope that can see back to nearly the beginning of the Universe. By combining archival research that reveals fascinating details about the personalities, rivalries and insights of the astronomers who created extragalactic astronomy with the latest data gleaned from a host of observa

tions, the authors provide a view of galaxies - and their place in our understanding of the Universe - as they have never been seen before.

It is certainly a well-researched, compelling survey of sidereal astronomy, with an emphasis on galactic structure. ... The stories of the characters and the well-researched nature of the narrative make Galactic Encounters a pleasure to read, especially if one is interested in a survey of some of the primary figures in the twentieth-century American astronomical community. ... the text could work well as supplemental reading for a history of astronomy course. (Stephen Case, Journal for the History of Astronomy, Vol. 46 (4), 2016)

Burrowing into the prose, one finds an engaging, accessible survey of the history of astronomy. ... it is certainly a well-researched, compelling survey of sidereal astronomy, with an emphasis on galactic structure. ... The stories of the characters and the well-researched nature of the narrative make Galactic Encounters a pleasure to read, especially if one is interested in a survey of some of the primary figures in the twentieth-century American astronomical community. (Stephen Case, Journal for the History of Astronomy, Vol. 46 (6), November, 2015)

With many great photographs - from Edwin Hubble to the Hubble Space Telescope - a robust approach to the science which is (usually) very well explained, and detailed footnotes, this is a history of galactic astronomy that should definitely find space on your bookshelf. (Andy Sawers, Astronomy Now, September, 2015)

There are 186 illustrations, including many not often seen, and the production is of high quality. Sheehan & Conselice have produced a meticulously researched masterpiece on the talented individuals who first explored the extragalactic Universe. (Simon Mitton, The Observatory, Vol. 135 (1247), August, 2015)

Galactic Encounters consists of three distinct parts, each with its own voice. ... the material is written at a level accessible to enthusiasts looking for a narrative introduction. ... If you enjoy reading stories about astronomers, or if you want an excellent introduction to galaxies and cosmology, then much of Galactic Encounters is perfect: fun to read and full of information. (Louise Edwards, Physics Today, June, 2015)

Sheehan (astronomy historian/writer;psychiatrist) and Conselice (astronomer, Univ. of Nottingham, UK) do this in an informative and engaging style by choosing prominent scientists who made significant contributions and then giving biographical information about these individuals. In this way, the authors not only maintain the scientific standard of the writing at a high level but also convey a flavor of how research is undertaken. ... Summing Up: Recommended. Lower-division undergraduates and general readers. (D. E. Hogg, Choice, Vol. 52 (8), April, 2015)

Galactic Encounters ... is a beautifully written and illustrated compilation of our progressive understanding of the cosmos since Galileo first pointed his telescope at the Milky Way and saw multitudes of stars. ... Galactic Encounters is an informative and enjoyable read ... . (Klaus Brasch, The Journal of the Royal Astronomical Society of Canada, Vol. 109 (1), February, 2015)

The book follows a roughly chronological timeline from the late eighteenth century to the present day. ... The text is aimed at the general reader, though there are plenty of references to scholarly sources for those who want to explore further. ... All in all, Galactic Encounters is an excellent work that will appeal to everyone interested in the deep sky, as well as to historians of astronomy. (Lee Macdonald, Journal of the British Astronomical Association, Issue 3, 2015)

The book is written starting from the earliest observations and scientists and continues all the way to twenty first century. ... The book is also suitable for general readers with maybe less background in physics or astronomy, as you don't need any mathematics to fly through the book and observations described within. ... 'Galactic Encounters' is very interesting, thorough and well-illustrated. (Kadri Tinn, AstroMadness.com, December, 2014)

William Sheehan is an astronomical historian and author of the biography of Milky Way photographer and pioneering astronomer E.E. Barnard, The Immortal Fire Within (Cambridge University Press, 1995). He is a regular scholar-in-residence at leading observatories, including Yerkes, Lick, Lowell and Mt. Wilson. As both a professional psychiatrist and an astronomer, he has a unique insight into the personalities of the pioneering figures of the history of science. He has published a number of books on the history of solar system studies, especially on the Moon and Mars. Sheehan is a consulting editor of Sky & Telescope, a 2001 fellow of the John Simon Guggenheim Memorial Foundation for his research on the Milky Way, and a recipient of the Gold Medal of the Oriental Astronomical Association. Asteroid no.16037 is named in his honor.

Christopher Conselice, an astronomer at the University of Nottingham, is one of the world's leading experts on galaxy formation and evolution. He was educated at the University of Chicago and the University of Wisconsin-Madison and has held post-doctoral positions at the California Institute of Technology and the Space Telescope Science Institute. He was a regular contributor to Mercury, the magazine of the Astronomical Society of the Pacific. He has published his research in leading professional journals, including Science, Nature and the Astrophysical Journal.

Acknowledgements.- Preface.- Chapter 1: Setting the Scene.- Chapter 2: Catchpole of the Nebulae.- Chapter 3: I Have Looked Farther.- Chapter 4: Chimneys and Tubules of the Galaxy.- Chapter 5: Of Leviathans, Spirals and Fire-Mists.- Chapter 6: The Various Twine of Light.- Chapter 7: Fields of Glory.- Chapter 8: What Stuff Stars Are Made Of.- Chapter 9: The Nebula is Leaving the Solar System.- Chapter 10: The Galactocentric Revolution.- Chapter 12: W.W. Morgan and the Discovery of the Spiral Arms of the Milky Way.- Chapter 13: To Forge a Galaxy.- Chapter 14: Over the Dark Side: Dark Matter, Black Holes and the Origin of the Universe.- Chapter 15: Dark Energy.- Chapter 16: Afterglows.- Index.
GOR011525918
9780387853468
0387853464
Galactic Encounters: Our Majestic and Evolving Star-System, From the Big Bang to Time's End by William Sheehan
William Sheehan
Used - Very Good
Hardback
Springer-Verlag New York Inc.
20161014
385
N/A
Book picture is for illustrative purposes only, actual binding, cover or edition may vary.
This is a used book - there is no escaping the fact it has been read by someone else and it will show signs of wear and previous use. Overall we expect it to be in very good condition, but if you are not entirely satisfied please get in touch with us
Trustpilot