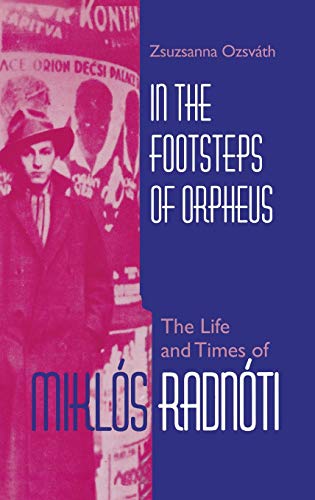 In the Footsteps of Orpheus
by Zsuzsanna Ozsvath

In the Footsteps of Orpheus Summary

In the Footsteps of Orpheus: The Life and Times of Miklos Radnoti by Zsuzsanna Ozsvath

A powerful account of the life, art, and tragic death of a 20th-century Hungarian Jewish poet.

"Zsuzsanna Ozsvath bring[s] forth Radnoti's life, his thought, and his passion with a depth of insight that is rare in a scholar. Brilliant, penetrating, and passionate, Ozsvath's book sets a new standard of excellence in Holocaust studies. It is a must for anyone who would approach the dark flame that burns at the core of the Event." -David Patterson, University of Memphis

Miklos Radnoti, a young Hungarian Jewish poet, was shot by Hungarian soldiers guarding him while on a forced march from Yugoslavia back to Hungary during the final days of World War II. When his body was discovered and exhumed nearly two years later, a small book of poems was found in his coat pocket. These poems, together with the rest of Radnoti's work, solidified his reputation as one of Hungary's greatest poets. Radnoti shared the experience of many Jewish artists and intellectuals in Central Europe during the early part of the 20th century, but his poetry brings out a particular and personal view of the Holocaust in Hungary. His work plays a unique role in the history of Central European culture as some of the most beautiful poems ever written in Hungarian, as a voice against the rise of totalitarianism, and as testimony to the destruction of Europe's Jews. Zsuzsanna Ozsvath places Radnoti within the context of the political and intellectual history of interwar Hungary, situating him as an artist who is both a Jew and a Hungarian patriot. Her sensitive translations from the Hungarian lend poignancy to this tragic and forcefully told story. This account of Radnoti's life and work explores the sources of the poet's inspiration and imagery and restores it to its extreme times and places.

Zsuzsanna Ozsvath is Professor of Literature and the History of Ideas at the University of Texas at Dallas, where she is also Director of the Holocaust Studies Program. She is coeditor and cotranslator (with Frederick Turner) of Foamy Sky: The Major Poems of Miklos Radnoti and Attila Jozsef's The Iron-Blue Vault: Selected Poetry.

Contents
Myth and Consciousness
Poetic Images: Socialist Art and Political Commitment
The Pull of Contraries: Making of the Past
Visions of Destruction, Lyrics of Resistance
In Extremis: 1944

In the Footsteps of Orpheus Reviews

"Co-translator of Radnoti's (Radnoti's) Foamy Sky (1992), Ozsvath (Ozsvath) (Univ. of Texas, Dallas) has written a useful and reverential biography of one of Hungary's greatest 20th-century poets. Radnoti's (Radnoti's) life story resembles that of many central European literary artists of Jewish inheritance: repelled by antisemitic writings in the early 20th century, the poet was attracted to Magyar national and literary traditions, which he universalized in his poetry. Ozsvath (Ozsvath) traces Radnoti's (Radnoti's) childhood and young manhood in the context of the central European Zeitgeist; his attraction to the political Left; his alienation as fascism gained power in Hungary; his marriage to Fanni Gyarmati, who inspired much of his poetry; and his martyrdom in May 1944 at the hands of Hungarian guards as part of a Jewish labor battalion and burial in a mass grave. Those who exhumed his body after the war found in his pocket a stained address book that had preserved ten poems he had composed as a forced laborer and on a death march, poems that established Radnoti's (Radnoti's) place in Hungarian literature. Including lucid analyses of Radnoti's (Radnoti's) poems, this well-designed, fully documented and indexed volume offers a bibliography of Hungarian and English sources and 11 useful photographs of the poet, his associates, and environs. Upper-division undergraduates through faculty.June 2001"

Zsuzsanna Ozsvath is Professor of Literature and the History of Ideas at the University of Texas at Dallas where she is also Director of the Holocaust Studies Program. She is co-editor and co-translator (with Frederick Turner) of Foamy Sky: The Major Poems of Miklos Radnoti and Attila Jozsef's, The Iron-Blue Vault: Selected Poetry.

GOR010754720
In the Footsteps of Orpheus: The Life and Times of Miklos Radnoti by Zsuzsanna Ozsvath
Zsuzsanna Ozsvath
Jewish Literature and Culture
Used - Very Good
Hardback
Indiana University Press
2001-03-01
288
0253338018
9780253338013
N/A
Book picture is for illustrative purposes only, actual binding, cover or edition may vary.
This is a used book - there is no escaping the fact it has been read by someone else and it will show signs of wear and previous use. Overall we expect it to be in very good condition, but if you are not entirely satisfied please get in touch with us.