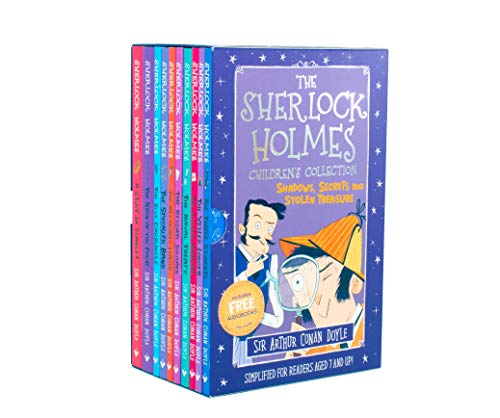 Foiling sinister mysteries, recovering stolen treasure and defending the honour of the king and the country are all in a day's work for Sherlock Holmes, world-famous amateur detective, and his faithful biographer Watson.
A simplification of Arthur Conan Doyle's Sherlock Holmes stories, illustrated to introduce children aged 7+ to mystery books and the classics.
This ten book set includes A Study In Scarlet, The Sign of the Four, The Blue Carbuncle, The Speckled Band, The Red-Headed League, The Reigate Squires, The Naval Treaty, The Sussex Vampire, The Red Headed League and The Three Students.
About Sweet Cherry Easy Classics:Sweet Cherry Easy Classics adapts classic literature into stories for children, introducing these timeless tales to a new generation.

"This 'Shadows, Secrets and Stolen Treasure' book collection is great value for money and is the ideal way to encourage early chapter readers to build their knowledge of classic literature whilst building up their reading stamina too."-Sam JD Thomas (blog)https://samjdthomas.home.blog/2019/11/11/series-ly-sensational/

Arianna is a freelance illustrator based in Florence, Italy, where she majored in Entertainment Design at Nemo Academy. Since then she has worked as 2D artist with Italian independent video game studios. The Sherlock Holmes series is her debut novel as an illustrator for Children's books. Sir Arthur Ignatius Conan Doyle was a British writer best known for his detective fiction featuring the character Sherlock Holmes. Doyle was a prolific writer; his non-Sherlockian works include fantasy and science fiction stories about Professor Challenger and humorous stories about the Napoleonic soldier Brigadier Gerard, as well as plays, romances, poetry, non-fiction and historical novels. Stephanie was born in England before emigrating to Australia - and later New Zealand - with her family, where she trained as a nurse. Whilst back in England on holiday, she met and married her husband, had a daughter and settled down. Stephanie's lifelong interest in writing became more serious when her first children's book, Avalanche, was published in the 1980s. Since then, she has had around forty children's books published, and has also published an historical novella for adults.

NGR9781782264088
The Sherlock Holmes Children's Collection: Shadows, Secrets and Stolen Treasure by Arianna Bellucci
Arianna Bellucci
The Sherlock Holmes Children's Collection (Easy Classics)
New
Hardback
Sweet Cherry Publishing
2019-07-25
1432
1782264086
9781782264088
N/A
Book picture is for illustrative purposes only, actual binding, cover or edition may vary.
This is a new book - be the first to read this copy. With untouched pages and a perfect binding, your brand new copy is ready to be opened for the first time.