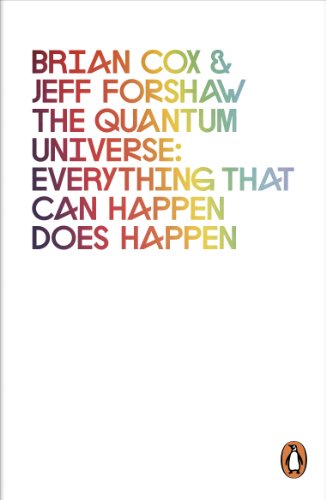 The Quantum Universe
by Brian Cox

Used Price
£3.99
New RRP £9.99
Free Shipping in the UK
What is quantum physics? How does it help us understand our amazing world? Where does it leave Newton and Einstein? And why, above all, can we be sure that the theory is good? This title gives us the real science behind the bizarre behaviour of the atoms and energy that make up the universe, and reveal how everything that can happen, does happen.
Reviews:
Trustpilot
Very Good Good Well Read

The Quantum Universe: Everything that can happen does happen by Brian Cox

From the bestselling authors of Why does E=mc2? comes The Quantum Universe, in which Brian Cox, presenter of the BBC's Wonders of the Solar System and Wonders of the Universe, and Jeff Forshaw go on a brilliantly ambitious mission to show that everyone can understand the deepest questions of science.

But just what is quantum physics? How does it help us understand our amazing world? Where does it leave Newton and Einstein? And why, above all, can we be sure that the theory is good?
Here, Brian Cox and Jeff Forshaw give us the real science behind the bizarre behaviour of the atoms and energy that make up the universe, and reveal exactly how everything that can happen, does happen.

A scientific match made in heaven...as breezily a written accessible account of the theory of quantum mechanics as you could wish for - from the Planck constant to the Higgs particle and everything theoretically in between * Observer *
Mindblowing ... what is novel about this attempt is that the writers take an intellectual rather than a historical approach ... it is a surprisingly rich idea that allows the authors to avoid using too much mathematics -- Christopher Potter * Sunday Times *
[Cox and Forshaw] stand together at the cutting edge of their discipline ... despite their elevated status, both men remain tiggerishly excitable about their subject ... Cox and Forshaw's book is a carefully guided tour through this quantum world ... popularize[s] without dumbing down -- Christopher Cook * Financial Times *
A thrilling voyage into the subatomic world * The Economist Books of the Year *
With brightness and gusto, the opening chapters deal with the culture shock that thinking about the sub-atomic world entails ...They are good at drawing connections between seemingly esoteric theory and everyday practicalities -- Doug Johnstone * Independent on Sunday *
The rock star of science... In Quantum Universe they do a great job of bringing a difficult subject to life -- Hannah Devlin * The Times *
Breaks the rules of popular science writing...admirably shies away from dumbing down...the authors' love for their subject-matter shines through the book * The Economist *
Admirably, Cox and Forshaw...treat topics that do not usually show up in popular books...readers will enjoy this engaging, ambitious and creative tour of our quantum universe -- David Kaiser * The Guardian *
By explaining theories about the world, Cox and Forshaw show that the workings of the universe can be understood by us all -- Fanny Blake * Woman & Home *

Brian Cox (Author)
Brian Cox is a Professor of Particle Physics and Royal Society University Research Fellow at the University of Manchester, and works at the CERN laboratory in Geneva. He is also a popular presenter on TV and radio.

Jeff Forshaw (Author)
Jeff Forshaw is Professor of Theoretical Physics at the University of Manchester, specializing in the physics of elementary particles. He was awarded the Institute of Physics Maxwell Medal in 1999 for outstanding contributions to theoretical physics.

GOR003991218
The Quantum Universe: Everything that can happen does happen by Brian Cox
Brian Cox
Used - Very Good
Paperback
Penguin Books Ltd
2012-06-21
272
0241952700
9780241952702
N/A
Book picture is for illustrative purposes only, actual binding, cover or edition may vary.
This is a used book - there is no escaping the fact it has been read by someone else and it will show signs of wear and previous use. Overall we expect it to be in very good condition, but if you are not entirely satisfied please get in touch with us.