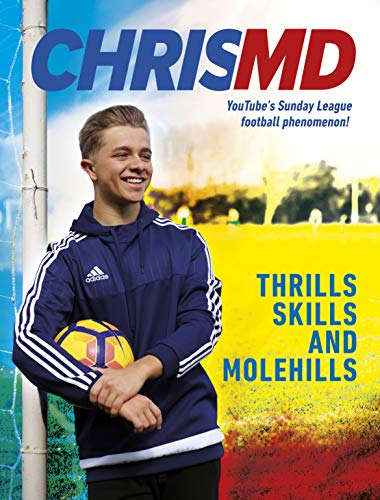 Thrills, Skills and Molehills
by ChrisMD

Thrills, Skills and Molehills: The Beautiful Game? by ChrisMD

YouTube star ChrisMD has turned amateur Sunday afternoon kick-arounds into a social media event - and now, for the first time, he's revealing all of his secrets.

Join Chris in this self-deprecating tour of his life in football, revealing the characters, the language, the training tricks and the top-level dietary regime (greasy sausage roll from the village cafe) that has got him where he is today.

Chris also reveals exclusive behind-the-scenes photos from his life as a YouTuber, and shares his proudest achievements, biggest embarrassments and favourite moments from his years of making videos with everyone from the Sidemen to his own family.

With over 3.5 million YouTube subscribers and 1 million followers on Instagram, Chris Dixon - better known as ChrisMD - is a social media phenomenon. Best known for his football content, Chris's self-deprecating coverage of his own Sunday League football team has gained him the sort of fanbase most Premier League stars would be proud of. His channel has also become the place to go for football challenges and FIFA videos.

GOR008850960
Thrills, Skills and Molehills: The Beautiful Game? by ChrisMD
ChrisMD
Used - Very Good
Paperback
Penguin Books Ltd
2018-02-15
176
0141387718
9780141387710
N/A
Book picture is for illustrative purposes only, actual binding, cover or edition may vary.
This is a used book - there is no escaping the fact it has been read by someone else and it will show signs of wear and previous use. Overall we expect it to be in very good condition, but if you are not entirely satisfied please get in touch with us.