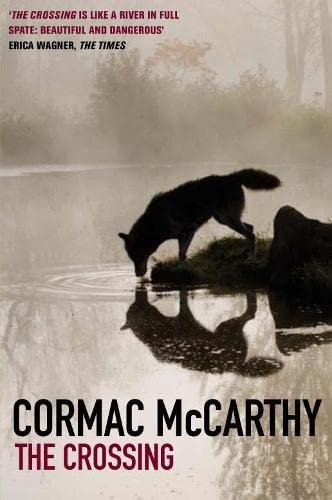 The Crossing
by Cormac McCarthy

In Stock
£2.99
A young boy comes of age in the desolate mountains of the Mexican border
Well Read
Only 1 left

The Crossing by Cormac McCarthy

VOLUME TWO OF THE BORDER TRILOGY

Set on the southwestern ranches in the years before the Second World War, The Crossing follows the fortunes of sixteen-year-old Billy and his younger brother Boyd. Fascinated by an elusive wolf that has been marauding his family's property, Billy captures the animal - but rather than kill it, sets out impulsively for the mountains of Mexico to return it to where it came from.

When Billy comes back to his own home he finds himself and his world irrevocably changed. His loss of innocence has come at a price, and once again the border beckons with its desolate beauty and cruel promise.

'Admirers of All the Pretty Horses will need little encouragement . . . McCarthy speaks to us in the thrilling, apocalyptic tones of an Old Testament prophet. We must treasure him' Sunday Telegraph

'The Crossing is like a river in full spate: beautiful and dangerous' The Times

`An American epic infused with a grand solemnity' Sunday Times

GOR001167974
The Crossing by Cormac McCarthy
Cormac McCarthy
Border Trilogy
Used - Well Read
Paperback
Pan Macmillan
1995-08-11
432
0330341219
9780330341219
N/A
Book picture is for illustrative purposes only, actual binding, cover or edition may vary.
This is a used book - there is no escaping the fact it has been read by someone else and it will show signs of wear and previous use. Overall we expect it to be in very good condition, but if you are not entirely satisfied please get in touch with us.