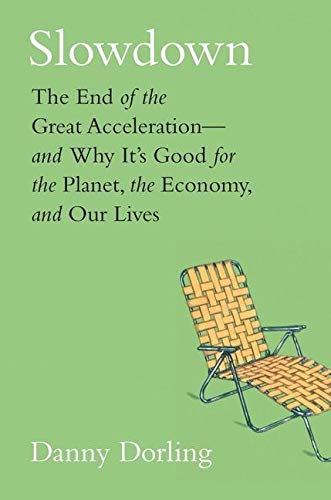 Out of Stock
£18.99
A powerful and counterintuitive argument that we should welcome the current slowdown--of population growth, economies, and technological innovation
Like New
Only 0 left

Slowdown: The End of the Great Acceleration-and Why It's Good for the Planet, the Economy, and Our Lives by Danny Dorling

The end of our high-growth world was underway well before COVID-19 arrived. In this powerful and timely argument, Danny Dorling demonstrates the benefits of a larger, ongoing societal slowdown

Drawing from an incredibly rich trove of global data, this groundbreaking book reveals that human progress has been slowing down since the early 1970s. Danny Dorling uses compelling visualizations to illustrate how fertility rates, growth in GDP per person, and even the frequency of new social movements have all steadily declined over the last few generations.

Perhaps most surprising of all is the fact that even as new technologies frequently reshape our everyday lives and are widely believed to be propelling our civilization into new and uncharted waters, the rate of technological progress is also rapidly dropping. Rather than lament this turn of events, Dorling embraces it as a moment of promise and a move toward stability, and he notes that many of the older great strides in progress that have defined recent history also brought with them widespread warfare, divided societies, and massive inequality.

"[Dorling] argues that society is not speeding up in the way some claim in books like James Gleik's Faster - The Acceleration of Just About Everything. Indeed, [he] does an excellent and entertaining job of showing that most of this is bunk."-Iain Macwhirter, Herald
"[A]n engrossing read that throws up all manner of questions, as well as offering an upbeat view of the planet's future"-Paul Donovan, Morning Star Online
"While poised at the dawn of the golden age of digital technology, this might seem counterintuitive, but the statistics, phase graphs and the maths back up the case for the end of the 'great acceleration'. Fascinating stuff."-Nick Smith, Engineering & Technology
"Blinded by a cult of progress, many of us can't see the slowdown that Dorling makes clear. A true public intellectual, he shows that, if we survive, life will be slower-and possibly better."-Paul Chatterton, author of Unlocking Sustainable Cities: A Manifesto for Real Change
"Slowdown is a new standard for visually understanding human history and social change. Using beautifully illustrated graphs, Danny Dorling provides a broad perspective on long-term social changes, the limits of growth, and widening inequalities, and emphasizes the importance of adapting to this slowdown."-Tomoki Nakaya, author of The Atlas of Health Inequalities in Japan

"A spellbinding book that will almost certainly make you reconsider what you thought was happening in and to the world, and then think again about where we might be heading."-Juliette Powell, author of 33 Million People in the Room

"Powerful, thought-provoking, and timely. Professor Dorling brilliantly exposes how spiraling work intensity, alongside bumper profits and freedoms for capital, cannot sustain people and planet. From stronger unions to a greener economy, he compellingly shows how we can choose a more hopeful and humane future."-Frances O'Grady, General Secretary of the Trades Union Congress

"Dorling's optimism is infectious as he brilliantly explores the huge challenges of a slowing pace of growth while the world transitions to a new 'normal' of stable and then shrinking populations."-Vicky Pryce, author of Women vs Capitalism

Danny Dorling is the Halford Mackinder Professor of Geography at the University of Oxford. His previous books include Inequality and the 1% and The Equality Effect. With others, he created the website worldmapper.org, a digital collection of demographic maps.

GOR010566992
Slowdown: The End of the Great Acceleration-and Why It's Good for the Planet, the Economy, and Our Lives by Danny Dorling
Danny Dorling
Used - Like New
Hardback
Yale University Press
2020-03-31
400
0300243405
9780300243406
N/A
Book picture is for illustrative purposes only, actual binding, cover or edition may vary.
This is a used book - there is no escaping the fact it has been read by someone else and it will show signs of wear and previous use. Overall we expect it to be in very good condition, but if you are not entirely satisfied please get in touch with us.