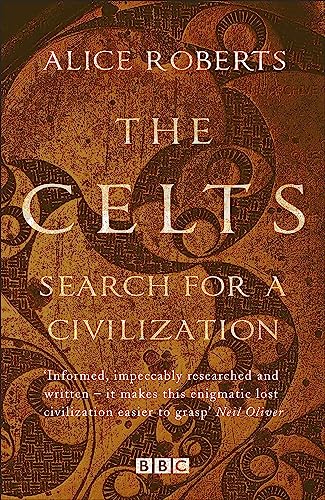 The Celts
by Dr. Alice Roberts

In Stock
£6.99
TV tie-in to major BBC series revealing a new history of the Celts and their international legacy today
Very Good
Only 3 left

The Celts by Dr. Alice Roberts

The Celts are one of the world's most mysterious ancient people. In this compelling account, Alice Roberts takes us on a journey across Europe, uncovering the truth about this engimatic tribe: their origins, their treasure and their enduring legacy today. What emerges is not a wild people, but a highly sophisticated tribal culture that influenced the ancient world - and even Rome.

It is the story of a multicultural civilization, linked by a common language.

It is the story of how ideas travelled in prehistory, how technology and art spread across the continent.

It is the story of a five-hundred year fight between two civilizations that came to define the world we live in today.

It is the story of a culture that changed Europe forever.


'Roberts's lightness of touch is joyous, and celebratory' Observer

Alice Roberts is an anatomist, archaeologist, anthropologist, historian, television presenter, author and professor at the University of Birmingham. She has presented Coast, Digging for Britain and The Incredible Human Journey on BBC2, Inside Science on Radio 4 and has appeared as an expert on Time Team on Channel 4. She writes a regular column for The Observer and is passionate about human health, evolution and history. She lives in Bristol with her husband and two children.

GOR007482402
The Celts by Dr. Alice Roberts
Dr. Alice Roberts
Used - Very Good
Paperback
Quercus Publishing
2016-05-19
320
1784293350
9781784293352
N/A
Book picture is for illustrative purposes only, actual binding, cover or edition may vary.
This is a used book - there is no escaping the fact it has been read by someone else and it will show signs of wear and previous use. Overall we expect it to be in very good condition, but if you are not entirely satisfied please get in touch with us.