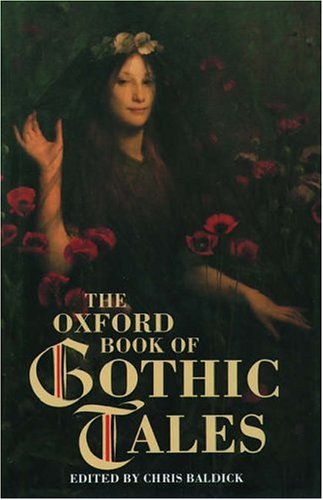 The Oxford Book of Gothic Tales
by Edited by Chris Baldick

In Stock
£5.49
This anthology traces the strength and diversity of Gothic fiction from the 18th century to the present day, with authors as diverse as Poe, Hardy, and Borges.
Very Good Good Well Read
6 in stock

The Oxford Book of Gothic Tales by Edited by Chris Baldick

Gothic fiction is generally associated with the repertoire of claustrophobic settings, gloomy themes, and threatening atmosphere. However, later writers shifted the emphasis from cruelty to decadence, while modern Gothic is distinguished by its imaginative variety of voice, from the chilling depiction of a disordered mind to the sinister suggestion of vampirism. This anthology illustrates the continuing strength of this special fictional tradition from the 18th century to the present day. It brings together work of writers such as Le Fanu, Hawthorne, Hardy, Faulkner, and Borges with their earliest forebears, and emphasizes the central role of women writers from Anna Laetitia Aikin to Angela Carter and Isabel Allende.

About Edited by Chris Baldick

About the Editor
Chris Baldick is a Lecturer in English at the University of Lancaster. He is the author of In Frankenstein's Shadow: Myth and Monstrosity in Nineteenth-Century Writing (1987).

GOR001157783
The Oxford Book of Gothic Tales by Edited by Chris Baldick
Edited by Chris Baldick
The Oxford book of . . . series
Used - Very Good
Paperback
Oxford University Press
1993-07-08
566
0192831178
9780192831170
N/A
Book picture is for illustrative purposes only, actual binding, cover or edition may vary.
This is a used book - there is no escaping the fact it has been read by someone else and it will show signs of wear and previous use. Overall we expect it to be in very good condition, but if you are not entirely satisfied please get in touch with us.