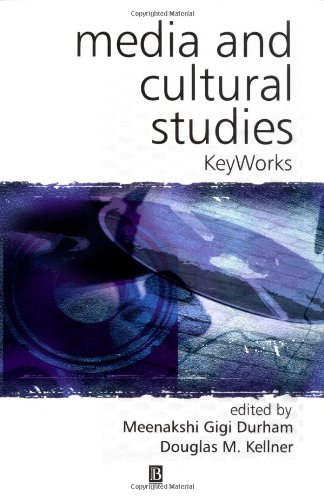 Media and Cultural Studies
by Edited by Meenakshi Gigi Durham

In Stock
£5.49
This is an anthology of significant theoretical readings pertaining to critical approaches to media culture and communications. It brings together what are considered the "KeyWorks" of current theory and method for the study of the abundance and diversity of culture and society in the present.
Very Good Well Read
Only 4 left

Media and Cultural Studies by Edited by Meenakshi Gigi Durham

Media and Cultural Studies: KeyWorks is a comprehensive anthology of the most significant theoretical readings on critical approaches to media culture and communications. This volume brings together what are considered the Key Works of current theory and method for the study of the abundance and diversity of culture and society in the present age. Spanning the gamut from the writings of Antonio Gramsci and the Frankfurt School to recent essays on identity, race, gender, and the postmodern turn, this book offers a range of core texts that have never before been collected into a single volume. The editors' introduction provides an in-depth analytical overview of critical media studies, and each section is fully contextualized. Media and Cultural Studies: KeyWorks is an indispensable scholarly and pedagogical tool, which fills a longstanding gap in the literature of this area. It will be essential reading for scholars and students in cultural studies, media studies, sociology, and related disciplines.

"A brilliant selection of classic and contemporary readings by two very acute scholars, who also share a deep commitment to the classroom. Their introductions to each section are short, sharp, and to the point. This book is the basis for a terrific course." John Downing, University of Texas at Austin


"These selections confirm the historical grounding of cultural studies in critical social thought and reinforce the transdisciplinary nature of the field. The result is an intellectually stimulating compilation of basic texts for readers in search of theoretical markers in the literature of critical communication studies." Hanno Hardt, University of Iowa/University of Ljubljana

"Selections cover a spectrum of approaches to cultural studies . . . thematic divisions are preceded by introductions and include articles reflecting a breadth of historical context and movement. Suitable for most university courses in cultural studies." Reference and Research Book News

"This work will prove very useful for academic courses in media and cultural studies. It contains a range of extracts and essays which are - genuinely - key works in these fields. The book will find its easy way on to shelves in academic and college libraries around the world, and those of any serious student or teacher covering this ground. The editors have done a very competent job, and come with no little personal recommendation. A very useful and reasonably priced way of accessing a wide range of texts without which, arguably, media and cultural studies could not properly work." Reference Reviews

About Edited by Meenakshi Gigi Durham

Meenakshi Gigi Durham is Assistant Professor of Journalism and Mass Communication at the University of Iowa. She has published widely on feminist media studies and related critical approaches, especially those of race, class, and sexuality.


Douglas M. Kellner is George Kneller Chair in the Philosophy of Education at UCLA and is author of many books on social theory, politics, history, and culture, including Television and the Crisis of Democracy; Postmodern Theory: Critical Interrogations (with Steven Best); and Media Culture: Cultural Studies, Identity and Politics Between the Modern and the Postmodern.

GOR001172095
Media and Cultural Studies by Edited by Meenakshi Gigi Durham
Edited by Meenakshi Gigi Durham
KeyWorks in Cultural Studies
Used - Very Good
Paperback
John Wiley and Sons Ltd
2001-01-18
656
0631220968
9780631220961
N/A
Book picture is for illustrative purposes only, actual binding, cover or edition may vary.
This is a used book - there is no escaping the fact it has been read by someone else and it will show signs of wear and previous use. Overall we expect it to be in very good condition, but if you are not entirely satisfied please get in touch with us.